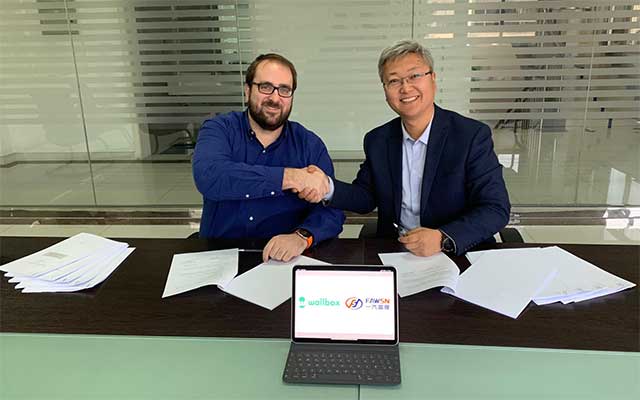 Wallbox Chargers, manufacturer of charging equipment for plug-in electric vehicles has entered into a joint venture agreement with Changchun FAWSN of China.

The arrangement sees the formation of a new company, Wallbox FAWSN Charging Systems Co Ltd, which will be based at a new manufacturing facility located in Suzhou, 100 km west of Shanghai.

The new company will focus exclusively on the exponential growth of plug-in vehicle sales in China. This passed 718,000 for the period Q1 to Q3 in 2018 and is comfortably expected to hit two million per year by 2020. China accounts for the manufacture and ownership of two-thirds of the three million plug-in vehicles presently on roads the world over.

Initial installed capacity at Suzhou is for the production and sales of 500,000 Wallbox chargers over the next five years, essentially marking the start of the brand’s entry into the Chinese market.

The joint venture will see Wallbox charging technology adapted to Chinese market conditions, under the guidance of Wallbox engineering operations and the involvement of Wallbox sales and marketing expertise. Start of production is planned for Q2 2019.

Changchun FAWSN, specialises in automotive component manufacturing and replacement part logistics. It was founded in December 2012. The company has around 7000 employees and 2000 product lines. Its sales passed 10 billion RMB (€1.3 billion) in 2017.

Wallbox Chargers SL has research, development and manufacturing in Barcelona, software operations in Madrid and sales in the UK. The business was founded in 2015 by Enric Asunción and Eduard Castañeda, who are now CEO and CTO respectively. Wallbox now operates in 30 markets around Europe and overseas, with nearly 100 staff. Wallbox is the EV charging partner to major automotive OEMs and energy companies.