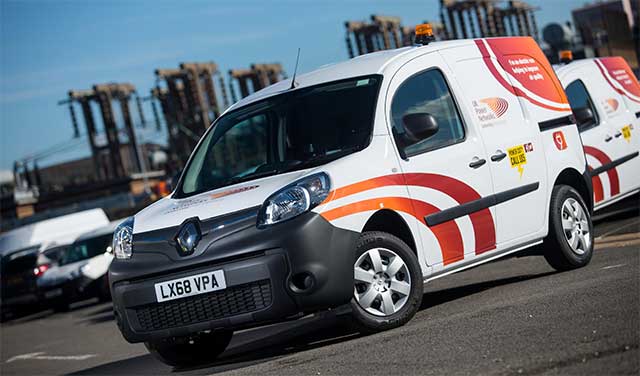 UK Power Networks will use the zero-emissions-in-use, 100 per cent electric Renault Pro+ commercial vehicles to maintain its electricity network that serves homes, businesses, schools, hospitals and EV charge points in and around the capital.

In line with UK Power Networks’ commitment to lowering its carbon footprint and improving air quality for future generations, the electricity network has plans to charge the vans using electricity that is solar generated at six of the locations. A total of 27 charge points are being installed at the company’s sites to help keep the vans moving around the clock.

In addition, the leading electricity distributor has added the all-electric Renault ZOE supermini to its company car scheme. It is the first time that UK Power Networks has added an EV to its approved car list and the development gives its drivers the option of switching to a more environmentally-compatible vehicle, while at the same time providing them with significant cost savings compared to running a conventionally-powered vehicle.

By adopting the Renault Kangoo Van Z.E. 33s and offering the Renault ZOE to its company car drivers, UK Power Networks believes that it will deliver an estimated 15 per cent cost saving over the life of the vehicle, with the savings originating from fuel usage, the exemption from Ultra-Low Emission Zone charges, and the availability of government grants.

UK Power Networks’ decision to opt for the Renault EVs was also influenced by employee feedback. Members of its team who live in and around London were particularly keen on the benefits that they would bring to their local living environment in the long term. Notably, many mentioned that widespread EV use would also bring significant health advantages to London residents, particularly children who are more susceptible to respiratory conditions.

Its usage of Renault EVs comes at a time when UK Power Networks is readying its operations for people choosing electric vehicles over ICE cars or vans. Nearly a third of EVs sold in the UK already connect onto the business’ electricity system and it estimates that this will grow to a total 4.1 million EVs by 2030.

Working out of the company’s depots in Brixton, Camden, Canning Town and Falconwood, the Renault Kangoo Van Z.E. will be ideal for negotiating London’s often heavy traffic thanks to the instant response from the advanced drivetrain and being fully automatic. While helping to cut down on noise and air pollution, the near silent vans are also immensely practical, offering a payload of 640kg, which is near identical to that of its diesel counterpart.

Patrick Clarke, UK Power Networks Director of Network Operations, said: “We are leading the development of a smart, flexible grid to support EVs, improve air quality and reduce our carbon footprint. Piloting Renault EVs in our fleet and introducing them to our company car list is improving the environment for communities now and investing in the health of future generations.”

Ricki Sayer, Transport Fleet Manager at UK Power Networks, said: “We selected the Renault Kangoo Z.E 33 for its superior range, comfort and adaptability. It is the first all-electric van we can put to work as a direct replacement of a conventionally-fuelled vehicle, without changing our work pattern or length of journeys and because it is ULEZ compliant, it benefits the environment and our whole life operating cost.”

Vincent Tourette, Managing Director, Groupe Renault UK, said: “UK Power Networks is committed to being the most environmentally responsible electricity network operator and it’s testament to the Renault Kangoo Van Z.E. 33 and Renault ZOE that such a leading organisation has chosen Renault electric vehicles to help them achieve their ambition.

“We take great pride in the development of our leading electric vehicle technology and it’s pleasing to see how this filters down to ultimately help preserve where we live and work, while also providing businesses and individuals with highly versatile and usable alternative-fuelled vehicles that are more than a match for those that are traditionally-powered.”