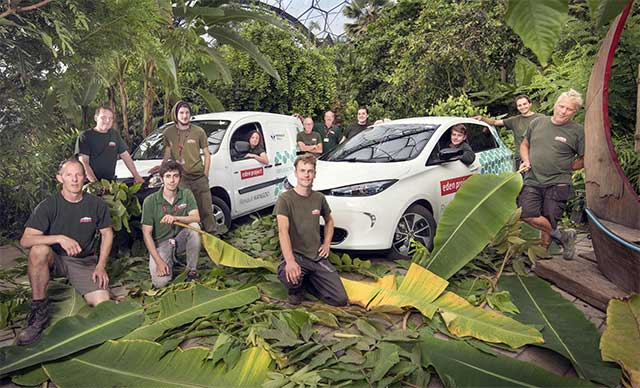 Renault electric vehicles will continue to play a major role in the day-to-day running of the Eden Project and its drive to educate its millions of visitors on the environmental benefits of EVs after the world-famous attraction took delivery of a new fleet of 100 per cent electric ZOE and Kangoo Z.E. models.

Comprising of three Renault ZOE hatchbacks and 14 Renault Kangoo Z.E. in Van and Maxi Crew Van Cab specifications, the vehicles replace the Eden Project’s previous Renault EV fleet. The latest vehicles complement Eden’s existing Renault Twizys. The quadricycles’ compact dimensions make them ideal for use across the entire Eden site – even in the narrow pathways through the tranquil, climate-controlled Biomes.

The usability and high visibility of its previous Renault EVs has allowed the Eden Project to lead by example when it comes to raising awareness of the benefits of electric vehicles in reducing carbon emissions. Compared to equivalent diesel and petrol vehicles, its original Renault EV fleet saved nearly 17 tonnes of CO2 since its inception in 2016, clocking up nearly 94,000 miles in and around its award-winning facility.

The mix of ZOE and Kangoo Z.E. will fulfil a variety of roles across the Eden Project, being used by its maintenance, horticulture, security, live programming and catering teams. A number of the vehicles will also be assigned to help with the provision of onsite medical support and transporting less able-bodied visitors around the site.

With zero tailpipe emissions and being near silent in use, the Renault EVs have little impact on the tranquillity and striking landscape of the Eden Project. Notably, during the last two years the lack of noise has allowed the busy Eden Live Team to work round the clock without affecting the visitor experience, while the fleet has also chauffeured presenters and celebrities to help facilitate the wide variety of filming that the renowned Cornish venue hosts every year.

The supply of the new fleet strengthens the partnership between the Eden Project and Renault, which has seen the automotive manufacturer become the Official Car Partner of the Eden Sessions – a series of outdoor concerts by world-famous acts held at the venue – and play a part in key visitor attractions, such as this summer’s Expedition Space where visitors were invited to take a Renault Moon buggy driving test.

Rita Broe, Marketing Director of the Eden Project, said: “We’re very pleased with our continuing partnership with Renault and it’s great to welcome these new electric vehicles into the Eden fleet. The electric Renaults are the backbone of the Eden Project, playing a vital role in the operations of nearly every team here. The beautiful fleet of vehicles suits our purposes perfectly, doing everything we need them to do while having minimal impact on the environment and communicating important messages about sustainability to our visitors. We’re very grateful to Renault for their ongoing support of our work.”

Adam Wood, Marketing Director, Renault UK, said: “We are delighted to continue our partnership with the Eden Project. As a manufacturer that is passionate about zero tailpipe emissions vehicles and at the forefront of developing EV technology, it’s very rewarding to work alongside such a renowned voice for sustainability and play a key role in helping the Eden Project as they promote the many attributes of electric vehicles to thousands of visitors each year.

Ben Fletcher, Electric Vehicle Product Manager, Renault UK, added: “It’s fantastic to see how Renault EVs have had such a positive impact on the Eden Project and its visitors. Not only have they helped the Eden Project perfectly illustrate the real-world benefits of electric vehicles, notably saving nearly 17 tonnes of CO2 emissions in two years, but at the same time have kept their operations running smoothly due to their immense ease-of-use and and flexible charging options.”

Renault is a pioneer of the EV market in Europe, having had a range of affordable all-electric cars and vans on the market since 2011 – with over 100,000 sold since launching. ZOE is Europe’s best-selling all-electric passenger car and the Kangoo Van Z.E. is the best-selling electric LCV. The award-winning Renault Z.E. range consists of the ZOE hatchback, the Twizy – a fun, distinctive, urban runaround – and the Kangoo Van Z.E. – a commercial vehicle that is identical to a normal Kangoo Van but with all the advantages of an EV, including no tailpipe emissions, the latest addition to the range is the new Master Z.E., with up to 1,128 kg payload and a 13m2 load area, it is perfect for last mile deliveries.