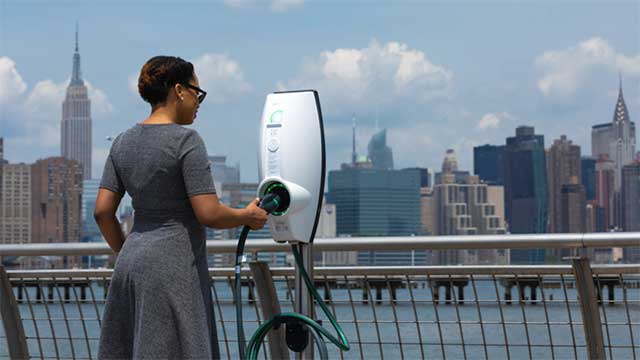 Kristof Vereenooghe (CEO of EVBox) announced hat EVBox, one of the leading global manufacturers of electric vehicle charging stations and related software, is committing itself to having 1 million EV charging points placed globally by the year 2025. He announced this on stage at the Global Climate Action Summit, which took place September 12-14 in San Francisco (USA).

“We are living in extremely challenging times. Global temperatures and sea levels continue to rise, while air quality is now at a level that can cause permanent and serious health damage. The sad reality is that around 90% of people living in cities today are not breathing safe air due to high CO2 emissions. Approximately 23% of these emissions are caused by (fossil fuel-based) transportation. However, there’s also hope, with many countries, cities, and companies stepping up by banning ICE vehicles and investing heavily in electric mobility. At EVBox, we are ready and able to contribute to accelerating electric mobility on a global scale—which is why, as an organisation, we are committed to having 1 million charging points by 2025. An ambitious commitment, but high ambitions are crucial if we hope to turn the tide,” said Kristof Vereenooghe, CEO of EVBox.

The Global Climate Action Summit brought together over 5000 global thought leaders, nations, cities, and companies. The Summit set out to celebrate the extraordinary achievements of organisations with respect to climate action, but also to create a deeper commitment to take even more action against climate change globally.

EVBox now has a global installed base of 60,000 charging points (including 700 fast charging stations). Reaching 1 million charging points by 2025 (an increase of over 1500% in seven years) may seem overly ambitious; however, there are several reasons why EVBox is not only committed, but also confident it will reach this goal:

– Demand for charging stations will surge along with the sales of electric vehicles. California alone will need up to 279,000 chargers by 2025 to meet state goals, according to the California Energy Commission. Globally, there is an expected demand of at least 20 million residential, commercial, and public chargers by 2025, according to research by BNEF and GTM.

– Economies of scale are kicking in as electric vehicles and related equipment (such as charging equipment) are becoming more affordable (with battery prices decrease). This reduces the cost of charging points at homes, at businesses, and in cities.

– EVBox continues to expand its portfolio (now offering the full 3.7­–350 kW range, with both AC and DC charging) and is heavily scaling up by forming new partnerships to design, develop, and (mass-)produce millions of competitive charging solutions by 2025 in an efficient and cost-effective way.