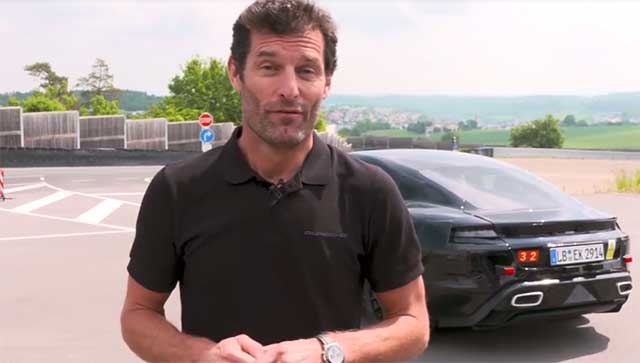 For Porsche the future is electric. The company wants to shift to electromobility before all other German auto manufacturers. By 2025 the aim is for every second Porsche sold to have an electric drive unit.

Porsche will release its first electric model, the Taycan sports car, in 2019. Current estimates project roughly twenty thousand units a year. That would be equivalent to roughly two-thirds of the current sales figures for the 911.

Mark Webber recently got behind the wheel of the new Taycan for the first time on Porsche’s test track at Weissach.

“Porsche did its first electric car in 1898. Obviously, it’s moved on a little bit since then!” says Webber, enthusiastically. “Naturally, E-mobility has been a huge part of our vision going forward. With the Taycan, it takes all of the work we’ve done with the 919 Hybrid [Le Mans Prototype 1 car], which of course had a huge electrical component to it. It may have been a hybrid but we understand this space very well with the 800V battery. That was pioneering – it was a very aggressive car.”

Two permanently excited synchronous motors (PSM), like those deployed in the Le Mans–winning 919 Hybrid, generate a permanent rotary motion that can be applied at any time without needing to be started—a technical feat achieved by having a permanently magnetized rotor forced into a rotary motion by the magnetic field of the stator.

PSM electric motors are the turbos of the electric motor milieu. They boast both extremely high sustained performance and maximum efficiency. One motor powers the Taycan’s rear axle, the other the front wheels. Together they generate over 600 hp (440 kW) and are fed by batteries designed to provide five hundred kilometers of range. The Taycan sprints from 0 to 100 kmh in well under 3.5 seconds and tops 200 kmh in under 12. That’s faster than a petrol powered Porsche Carerra GTS and second only to the GT2RS in terms of power output in the Porsche range, just to put things in perspective.

“It’s four-wheel drive, four-wheel steer – this is going to be the absolute game changer for the EV sector,” says Webber. “It’s not even in the same sentence as the Tesla. Everyone can dine out on the 0-100km/h – it’s like flipping burgers. But the Taycan’s driving dynamics, charging times, interface, finish and ergonomics of the cockpit are just incredible.”

Taycan’s lithium-ion battery pack is capable of covering off near enough 500km on one charge. Best of all, Porsche maintains that the Taycan will be compatible with the 800V chargers that are being rolled out over Europe in the coming years, charging the car up to 80 per cent in just 15-minutes.