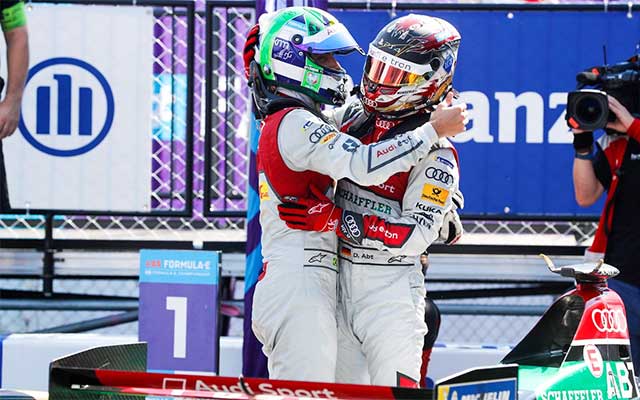 Jean-Eric Vergne picked up his fourth win of the season at the final race of the 2017/18 ABB FIA Formula E Championship in New York to round-off a sensational day of sport for the French nation.

The TECHEETAH driver – and newly-crowned Formula E champion – fended off pressure from the outgoing title-winner Lucas di Grassi in a fight to the flag reminiscent of the nail-biting finish from earlier this season in Punta del Este.

The pair were nose-to-tail for the majority of the second phase of the race, with di Grassi eventually weighing-up the risk and settling for second place alongside his team-mate Daniel Abt who finished third. The double podium finish and di Grassi’s seventh in as many races sealed the teams’ title for Audi Sport ABT Schaeffler.

After thunderstorms and overcast conditions throughout the morning’s running, Vergne made a lightning start from third place on a drying track – moving into the lead by the first corner and jumping both Julius Baer pole-sitter Sebastien Buemi and TECHEETAH team-mate Andre Lotterer.

The Frenchman first looked to the outside of Buemi and then the inside with a late-braking move to take the lead and keeping TECHEETAH on the front-foot and in control of their own destiny in the teams’ title.

Lotterer, however, jumped the start and was handed a 10-place stop and go penalty – dropping him down the order and jeopardising the chances of the team to clinch both championships.

Fortunately, Vergne didn’t suffer the same fate and kept his rivals at bay. Both Vergne and di Grassi pitted on lap 23 and couldn’t be separated after exiting their respective garages, marking the last time for a mandatory mid-race car swap – something teams, drivers and fans have grown accustomed to in the first years of Formula E.

Vergne defended stoutly and ended his championship-winning season in style on the top step of the podium.

The battle between the leading teams wasn’t over as Buemi threatened to spoil Audi Sport ABT Schaeffler’s party. The Renault e.dams driver was looking to repeat his performance from yesterday, but Abt managed to conserve his energy after pitting a lap earlier and securing the final podium spot and Visa fastest lap.

Lotterer made progress through the field to finish ninth, but it wasn’t enough as TECHEETAH narrowly missed out by only two points at the chequered flag – the smallest-ever winning margin in the teams’ championship.

Mahindra Racing’s Felix Rosenqvist took fifth ahead of Mitch Evans and Nelson Piquet Jr. for Panasonic Jaguar Racing. Nick Heidfeld brought an end to his campaign with a fourth points-scoring finish in a row in eighth, ahead of Lotterer and DS Virgin Racing’s Sam Bird in 10th.

Now the dust has settled on yet another intense and unpredictable season of electric street racing – Formula E now embarks on a summer break, before entering a new era in Ad Diriyah on December 15.

With four different champions – as well as new names, new faces and new cars for next season – the countdown is already on for season five of the ABB FIA Formula E Championship and the competitive debut of the futuristic new-look FIA Formula E Gen2 car.

Jean-Eric Vergne, TECHEETAH, said: “Firstly I want to congratulate Audi for winning the teams’ championship. I want to congratulate my team for the job they’ve done this year because honestly, it’s really amazing. This weekend started out with a mistake in qualifying that got me disqualified. I came back through the field – attacking very hard and overtaking many cars. Today qualifying went pretty well in the wet. Then I had a strong, aggressive, start and then I was able to manage the race, which was very tough as we all know Audi is really, really quick in the race. No mistakes were allowed on my side and I think I’ve achieved that.”

Daniel Abt, Audi Sport ABT Schaeffler, said: “What an incredible finish to the season with four podiums this weekend. We’re the teams’ champions and we managed to achieve what we hadn’t before – everyone can be super proud of the job they’ve been doing all season long. I’m just thankful and very, very happy. Now it’s time to get a break and we’ll bounce back in season five – what a big task ahead!”

Lucas di Grassi, Audi Sport ABT Schaeffler, said: “I think Vergne deserved the championship this year. He made no mistakes, he was very consistent, so congratulations to him and TECHEETAH. It shows that in Formula E, you need to do the job all around to make it happen. On my side, that’s exactly what we did. We were nowhere in the first races, we made mistakes but the car was already fast. It’s nothing short of a miracle to get to second in the drivers’ standings – I’m very, very happy – but I’m more happy that Audi has won the teams’ championship. Those guys back in the garage, everyone works really hard. Every time we say the same but I’m very proud that Audi committed to Formula E, suffering a lot, keeping their head high, recovering and in the last race winning by two points is just unbelievable.”

– Handing over the baton; following three successive titles for Renault e.dams in Formula E since the inaugural season, that honour now goes to Audi Sport ABT Schaeffler who edged out TECHEETAH in New York.

– Finishing strong; after failing to score points in the first five races of the season, Lucas di Grassi vaulted from last in the standings to finish as runner-up with seven consecutive podiums – the longest streak in the history of Formula E.

– Tight at the top; the two-point gap between Audi Sport ABT Schaeffler and TECHEETAH is the smallest-ever winning margin in the teams’ championship.