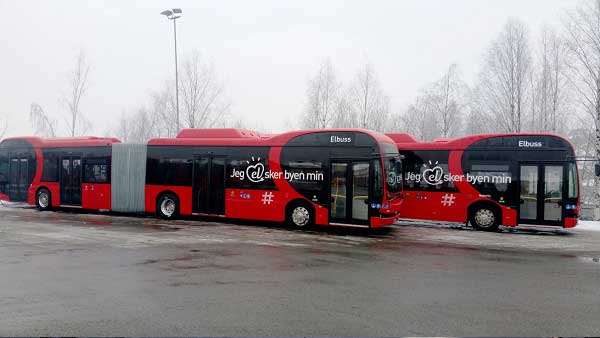 After the recent Norwegian order for 42 articulated BYD electric buses for Oslo, now follows another large order from Sweden for a total of 24 electric buses.

The province of Södermanland, on the south eastern coast of Sweden, will soon have 24 BYD 12 metre electric buses in service. They will be operated by Swedish public transport operator, Nobina.

Nobina already has BYD 12m and 18m articulated buses running in Ängelholm and Oslo and has more on order for Nortällje, Landskrona and Oslo.

The fleet is expected to be delivered by next summer 2019.

Martin Atterhall, Fleet manager, Nobina Group, said: “We are determined to be in the forefront of bus and fleet operations, developing smart and sustainable ebus solutions to the public transport authorities of the Nordics. The experience we have had with other BYD models has convinced us that we can move ahead with confidence to add further electric buses to our fleet and look forward to the cleaner and more comfortable traffic which will follow”.

Isbrand Ho, Managing Director at BYD Europe: “BYD’s efforts in the Scandinavian market are paying off. Our recent orders in not only the Swedish but also in the Norwegian market have made BYD one of the leaders in the electric bus field. Winning this order gives us more confidence to win more in this important market. We are looking forward to turning Scandinavia even greener.”