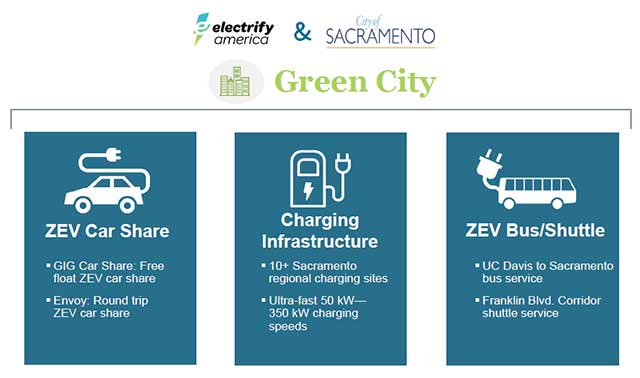 Electrify America and the City of Sacramento announced new projects that will increase access to zero-emissions vehicles (ZEV) in the Sacramento region, expand ZEV technology use, and prepare the City for future electric vehicle adoption.

The projects – which include two new car sharing services, new ZEV bus and shuttle routes and state-of-the-art electric vehicle charging systems throughout the region – are part of Electrify America’s Green City Initiative, which was announced by the company and city officials in 2017. Electrify America is a wholly-owned subsidiary of Volkswagen Group of America.

Projects include:
• CAR SHARING – Electrify America is investing between $15 and $18 million for the launch of two ZEV car share services within the City of Sacramento which complement each other with different service areas while providing the same easy access:

GIG Car Share – Free Float Car Sharing: GIG Car Share, which is powered by AAA Northern California, Nevada, and Utah, will offer free float car share service in Sacramento. This service allows users to pick up and drop off a vehicle at any legal public parking spot, including metered locations, within a 13 sq. mile “Home Zone.” Perfect for a first-mile-last-mile connection, the user either pays for rental time or distance traveled, whichever is less expensive. With the GIG app, users can locate the nearest car to reserve it for up to 30 minutes in advance or to initiate a spur of the moment trip. GIG Car Share will initially launch with 260 vehicles. These cars will be easy to recognize with a roof-mounted bike rack, giving users the option of combining two different modes of transportation, bike and car, for daily commutes or weekend adventures. More than 70 percent of the census tracts in GIG’s proposed car sharing Home Zone are low-income or disadvantaged communities. This service will be available in Q1 2019.

Envoy – Round Trip Car Sharing: Electrify America is also investing in a program with Envoy Technologies, a community-based EV car-share service based at apartment buildings as an amenity. Vehicles can be reserved, picked up and returned to the same location. The Envoy fleet will feature 142 vehicles spread in pairs across 71 locations. Each car will have a dedicated Level 2 EV charger. With 75 percent of the fleet expected to serve low-income and disadvantaged communities, Envoy provides equitable transportation for drivers running personal errands, as well those looking to participate in the gig economy and generate income that is 30 percent higher than the minimum wage. These cars will be available for rental by residents as a paid service at competitive rates. Initial properties will begin offering service by the end of summer 2018 with more locations coming on board every month.

• ZEV BUS/SHUTTLE SERVICES – Electrify America is investing between $11 and $14 million in a ZEV bus service and an on-demand micro-shuttle service. To support powering the fleets, Electrify America will also install charging stations with ultra-fast chargers to power each service.

Electric Bus Service – UC Davis to Sacramento: Electrify America will enhance bus service between UC Davis and Sacramento with 12 new electric buses that will run from the main campus to the UC Davis Health campus in Sacramento. The shuttle will be co-run by Sacramento Regional Transit (SacRT) and the Yolo County Transportation District. Plans include increasing route frequency and providing four bus stops, including UC Davis, West Sacramento and two stops in Sacramento, downtown and at the UC Davis Health campus, which will also will be the eventual home of the planned Aggie Square tech complex. The bus service is expected to add more than 400,000 bus rides in the first year of operation. The enhanced route will start in 12 to 18 months once the electric bus manufacturer begins deliveries.

On-Demand Electric Shuttle Service – Franklin Region: Electrify America has provided the funding for this service which will be operated by Sacramento Regional Transit. SacRT is planning an initial launch in July 2018 as a new, on-demand micro-transit shuttle service. Funding from Electrify America will allow SacRT to transition the three-shuttle fleet to ZEV shuttle buses, once the shuttle manufacturer begins deliveries. The service is expected to provide about 26,000 rides in its first year. Consumers will be able to access it through an app-based ride hailing system, an online reservation or by phone. This service provides additional mobility for residents and visitors to this area, which has been without a bus line since 2008.

The proposal for this route serving the neighborhoods of the Franklin Boulevard corridor was submitted by Franklin Neighborhood Development Corporation (FNDC), which is investing in and improving the physical infrastructure, social services, public transportation, education, and job creation for Franklin Boulevard Business District’s residents, and business and property owners. More than 90 percent of the micro-shuttle’s service territory is in a low-income or disadvantaged Sacramento neighborhood.

• EV CHARGING INFRASTRUCTURE – With an investment of $14 million to $16 million, Electrify America will install more than 10 ultra-fast EV charging stations in the Sacramento region which will be available to the public. The charging stations will have a range of power from 50 kilowatts (kW), which is most commonly used in today’s electric vehicles, to 150 and 350kW. This future-proof charging technology will meet the needs of all electric vehicles available today and the advanced EVs expected as early as 2020. The Electrify America ultra-fast charging technology can deliver energy for up to 20 miles of range per minute, or seven times faster than today’s 50kW DC chargers. This investment includes chargers for the bus and shuttle services, plus the Level 2 chargers for the car share program.

The specific details on each of these ZEV initiatives – car sharing, bus service, micro-shuttles and charging infrastructure – will be announced closer to the launch of each service, with a roll-out of initial services anticipated in late 2018.

Sacramento was chosen as Electrify America’s Green City in 2017 after a detailed and comprehensive evaluation process, which looked at city size, commuting patterns, and potential to impact disadvantaged and low-income communities.

Electrify America’s Green City Initiative aims to provide access to ZEVs to those who do not own ZEVs, or cannot afford to own ZEVs, and therefore represent a key underserved population.

Overall, Electrify America is investing $800 million in California over 10 years to support the increased use of ZEV technology with more ZEV infrastructure and education.

Jun 15, 2018Blagojce Krivevski
The rapid charging system for the I.D. R Pikes Peak is a science in its own right [videos]Porsche launches digital charging service for EVs