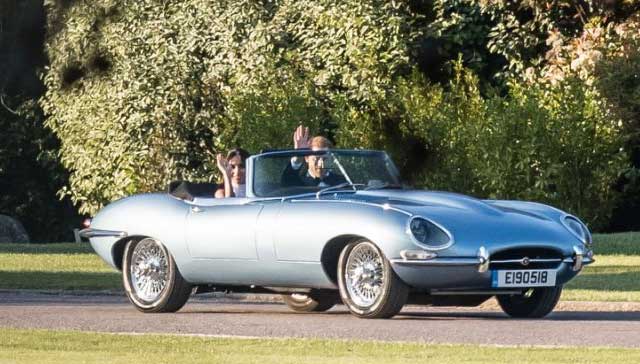 Prince Harry and Meghan Markle left the luncheon after their wedding at Windsor Castle by driving to their reception in a zero-emissions version of what Enzo Ferrari once dubbed “the most beautiful car in the world”.

The Jaguar E-Type was originally manufactured in 1968, but last year Jaguar revealed it had electrified the vehicle to create what it called the E-Type Zero.

The Duke and Duchess of Sussex depart Windsor Castle for a reception hosted by The Prince of Wales at Frogmore House, in a silver blue Jaguar E-Type Concept Zero. This vehicle was originally manufactured in 1968, and has since been converted to electric power #RoyalWedding pic.twitter.com/hRrxEUlFlJ

The Jaguar E-Type Zero is powered by a 300 hp electric motor under its legendarily long hood, and is quicker than the original E-Type—going from 0 to 100 km/h (62 mph) takes just 5.5 seconds, about one second faster than a Series 1 E-Type.