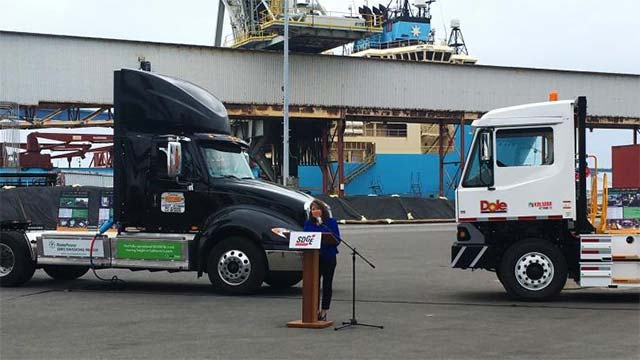 The San Diego region’s transition to electric vehicles —which can help to dramatically reduce air pollution—is getting another major boost.

These projects build upon SDG&E’s Power Your Drive program, which is ramping up to add 3,500 charging stations at multi-family communities and workplaces.

Partnering with SDG&E in these projects include the San Diego Port District, port tenants such as Dole (the largest world’s largest producer and marketer of fruits and vegetables), the San Diego International Airport and its tenants, and TransPower, an Escondido-based company that has supplied electric trucks to port tenants.

SDG&E’s projects were developed under Senate Bill (SB) 350, which recognized the vital role energy companies like SDG&E play in widespread transportation electrification by installing and expanding the charging network to help customers green their fleets.

Transportation electrification is not just a tool for mitigating climate change, it’s also the natural progression of renewables, given that electric cars and trucks plugging into the power grid will be charging on ever increasing amounts of energy generated by the sun and wind.  The San Diego region has an abundance of solar energy during the day, and transportation electrification can help maximize the use of the excess solar energy.

Today, 43 percent of the energy SDG&E delivers to our customers comes from renewable sources, with no contracts for coal.

Below are summaries of the approved projects:

– Port Electrification:  Install 30-40 pieces of equipment to support electric semi-trucks and other medium/heavy-duty equipment at the Port of San Diego;