Ontario Making it Easier to Charge Electric Vehicles at Workplaces 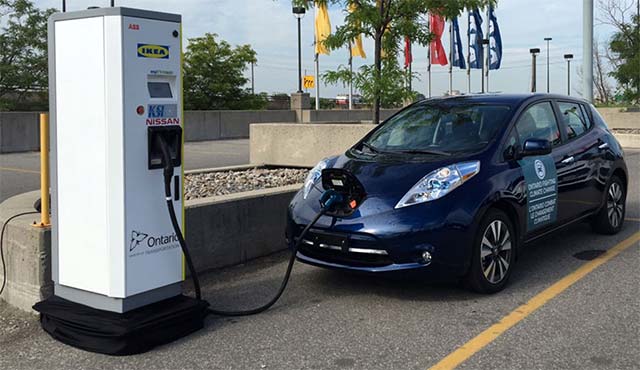 Ontario is making it easier to use electric vehicles to get to and from work by assisting employers, commercial building owners and managers to install charging stations at their workplaces.

This investment is part of Ontario’s Climate Change Action Plan and is funded by proceeds from the province’s cap on pollution and carbon market.

Ontario is investing proceeds from its carbon market into programs that help households and businesses reduce greenhouse gas emissions and save money on energy costs. These programs include home energy and social housing retrofits, public transit and electric vehicle incentives and infrastructure.

Making it easy for people to switch to electric vehicles and reduce their carbon footprint is part of Ontario’s plan to create fairness and opportunity during this period of rapid economic change. The plan includes a higher minimum wage and better working conditions, free tuition for hundreds of thousands of students, easier access to affordable child care, and free prescription drugs for everyone under 25 through the biggest expansion of medicare in a generation.

– The Workplace Electric Vehicle Charging Incentive Program will provide 80 per cent of the capital costs to install level 2 chargers, up to $7,500 per charging space.

– Applications are now, and reviewed and processed in the order they are received, until the program funding is exhausted.

– Level 2 charging stations use a 240 volt system (similar to a clothes dryer plug) and can fully charge a vehicle from a zero per cent charge in about four to eight hours.

– It is estimated there are over 1,300 public chargers available in Ontario, including chargers not funded under the Electric Vehicle Chargers Ontario program.

– Greenhouse gases from cars account for more emissions than those from iron, steel, cement, and chemical industries combined.

– There are more than 16,000 electric vehicles currently on the road in Ontario.