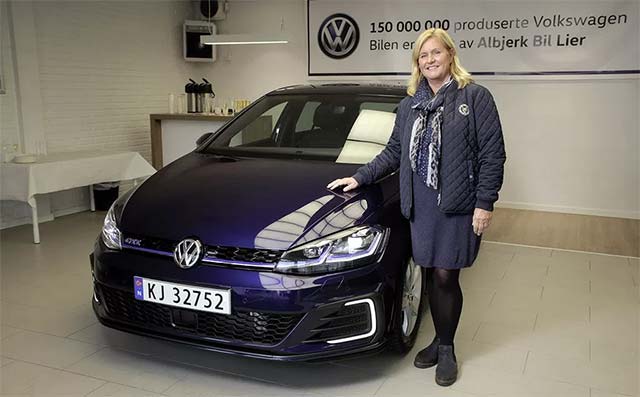 The 150 millionth Volkswagen will be driving along the roads in Norway from now on: the anniversary vehicle – a Golf GTE – left the assembly line at the main plant in Wolfsburg in August.

Now, Volkswagen has delivered the car to a customer in the town of Lier not far from the Norwegian capital Oslo.

Dr. Wolf-Stefan Specht, Head of Sales Europe at the Volkswagen brand, commented: “The 150 millionth Volkswagen symbolizes the brand’s long tradition. At the same time, the Golf GTE plug-in hybrid offers a glimpse of the future of mobility at Volkswagen. That is why we are delighted the GTE has been delivered to a customer in Norway, the frontrunner for e-mobility in Europe.”

The new owner of the anniversary vehicle, Turid Sedahl Knutsen, deliberately decided in favor of the Golf with plug-in hybrid drive: “It’s great the Golf GTE gives customers a climate-friendly choice. Not only that, it’s very sporty and great fun to drive, too. I’m thrilled with the new technology.” Knutsen can now enjoy an all-electric commute. On longer journeys, for example when she goes on vacation, the thrifty TSI engine extends the range. For Knutsen, this is already her sixth Golf – and she has also owned two Passat, a Polo and a Caravelle.

Norway is the frontrunner for e-mobility in Europe. Thanks to decisive joint action by the government and local authorities, power suppliers and vehicle manufacturers, e-mobility has become a popular drivetrain option for customers. All-electric or plug-in hybrid vehicles accounted for 37 percent of all new vehicle registrations in Norway in the period from January to September 2017. The Volkswagen e-Golf2 was the best-selling model in the market.