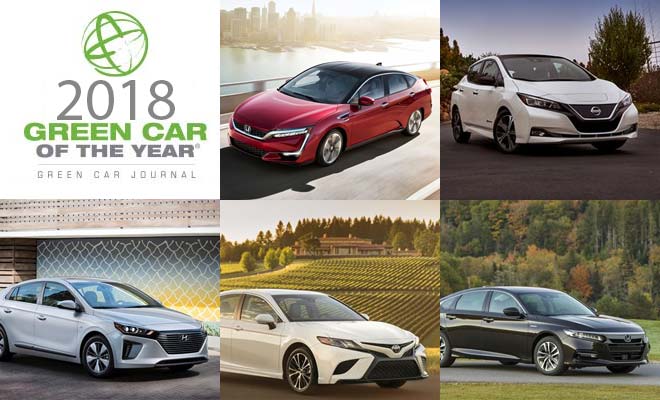 The 2018 models include the Honda Accord, Honda Clarity, Hyundai Ioniq, Nissan LEAF and Toyota Camry. The announcement of the winner will take place at the Los Angeles Convention Center on Thursday, November 30, at 8:00 a.m. PST inside the Technology Pavilion, alongside other green transportation announcements.

For over a decade, an increasing number of vehicle models have been considered for the Green Car of the Year program annually, a reflection of the auto industry’s expanding efforts in offering new vehicles with higher efficiency and improved environmental impact. Green Car Journal has been honoring the most important “green” vehicles every year at the LA Auto Show, and now AutoMobility LA, since its inaugural award was announced in 2005.

The Green Car of the Year is selected through a majority vote by an esteemed jury that includes celebrity auto enthusiast Jay Leno, as well as leaders of noted environmental and efficiency organizations including Jean-Michel Cousteau, President of Ocean Futures Society; Matt Petersen, President and CEO of Los Angeles Cleantech Incubator and Board Member of Global Green USA; Dr. Alan Lloyd, President Emeritus of the International Council on Clean Transportation; Mindy Lubber, President of CERES; and Kateri Callahan, President of the Alliance to Save Energy. Green Car Journal editors round out the jury.

During the award’s vetting process, Green Car Journal considers all vehicles, fuels and technologies as an expansive field of potential candidates is narrowed down to a final five. Finalists are selected for their achievements in raising the bar in environmental performance. Many factors are considered including efficiency, performance characteristics, ‘newness,’ affordability and overall environmental achievement. Availability to the mass market is important to ensure honored models have the potential to make a real difference in environmental impact. Green Car of the Year finalists must be available for testing and offered for sale by January of the award year.

“This year’s Green Car of the Year finalists reflect the continuing evolution of the automobile and the drive toward ever-greater environmental compatibility,” said Ron Cogan, editor and publisher of the award-winning Green Car Journal and GreenCarJournal.com. “Each addresses environmental performance in distinct ways, using battery electric propulsion, highly-efficient internal combustion alone or combined with electric drive, and even hydrogen fuel cell power. Importantly, these are exciting and fun-to-drive models offering consumers varying ways to drive ‘green’ that fit their unique needs and sensibilities, and are readily available to the mass market.”

2018 HONDA CLARITY
Honda’s 2018 Clarity features an appealing design with a luxuriously-appointed and spacious interior. It’s distinguished as the only model offering electric, plug-in hybrid, or hydrogen fuel cell power. While electrical energy is delivered in different ways by each of these advanced vehicles, all are driven by an electric motor. The Clarity Plug-in Hybrid earns an EPA rated 47 miles of battery electric range and a total driving range of 340 miles.

2018 HYUNDAI IONIQ
The 2018 Ioniq comes in three variations including electric, hybrid, and plug-in hybrid choices, each with its own unique styling cues and character. The Ioniq Electric delivers an EPA rated 124 miles of battery electric driving range and 136 combined MPGe fuel efficiency. The Ioniq Hybrid achieves an industry-leading 59 highway mpg, while the Ioniq Plug-In drives 27 miles on battery power and features a total driving range of 654 miles.

2018 NISSAN LEAF
Nissan’s all-new generation LEAF comes to showrooms with new styling, substantially greater driving range, and a full suite of Nissan Intelligent Mobility technologies. This all-electric model is sportier with excellent aerodynamics. Its 150-mile battery electric range makes it a formidable competitor in the ever-expanding electric vehicle market, an important consideration for a model that’s been the best-selling affordable electric worldwide since its 2010 debut.

2018 TOYOTA CAMRY
Toyota’s eighth generation Camry sedan has emerged a sportier and more dynamic version of its former self, featuring edgier styling and a fun-to-drive character while also delivering welcome efficiency with three new powertrains – a 2.5-liter 4-cylinder, 3.5-liter V-6, and a Hybrid powered by the automaker’s next-generation Toyota Hybrid System. The Camry Hybrid approaches the combined fuel efficiency of Toyota’s Prius by delivering up to 53 highway mpg.