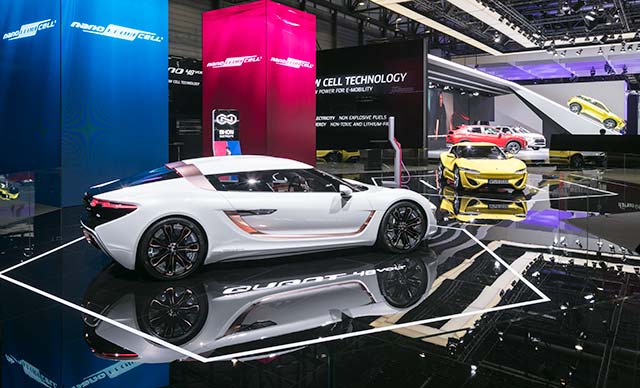 A throttled and adapted drive system based on the type installed in the QUANT 48VOLT could be used to fulfil the criteria for the maximum battery and motor output. For the 2018/19 season, the FIA wants to allow battery output of 54 kilowatt hours and raise motor output to 250 kW. As it stands, the nanoFlowcell all-wheel electric drive in the QUANT 48VOLT has a maximum output of 760 hp (560 kW). Energy is provided by a flow cell with six membranes which can deliver a sustained supply of 300 kWh. It enables the QUANT 48VOLT to accelerate from zero to 100 km/h (0-62 mph) in less than 2.4 seconds, reach a top speed of more than 300 km/h (186 mph) and cover a range of more than 1,000 kilometres (620 miles) without refuelling.

“We have almost perfected the nanoFlowcell 48 VOLT electric drive and are confident that our flow-cell system is superior to the lithium-ion battery technology currently used in electric vehicles, and is capable of leading the premium motorsport class for electric sports cars,” says Nunzio La Vecchia, developer of the nanoFlowcell and CEO of nanoFlowcell Holdings Ltd. “Racing success in Formula E – just like our success in flow cell research – is hard fought, but we’re showing that we’re not shying away from the competition.”

With its planned participation in the FIA Formula E Championship, nanoFlowcell Holdings is showing that electric mobility can be designed to be environmentally compatible and future-safe without compromising system output and inherent safety (low voltage) as well as the ecological and economic sustainability of the technology.

Taking into consideration the preparations required in order to participate in the FIA Formula E Championship and assuming acceptance on the part of the FIA, it will be at least the racing season after next before a QUANT flow-cell electric sports car is able to compete in its first official FIA race.

The cost of manufacturing the bi-ION electrolyte liquid on an industrial scale is estimated at substantially less than ten cents per litre. The distribution and sale of the electrolyte liquid is straightforward as its product characteristics mean it is not bound by any laborious environmental constraints and could be handled via existing refuelling infrastructures.

Under the QUANT brand, nanoFlowcell Holdings Ltd develops prototype vehicles with low-voltage electric drive for the purpose of testing the new flow-cell based nanoFlowcell technology. In 2016, the company demonstrated the potential of an electric vehicle powered by nanoFlowcell mainly with its QUANTiNO 48VOLT technology showcase, a road-legal mid-size sports car with nanoFlowcell low-voltage drive able to run fully electrically for upwards of 1,000 kilometres – with a top speed of 200 km/h and an acceleration from zero to 100 km/h of less than five seconds.

In short, QUANT powered by nanoFlowcell is a feasible form of electric mobility that protects the environment without compromises in comfort, performance or cost.