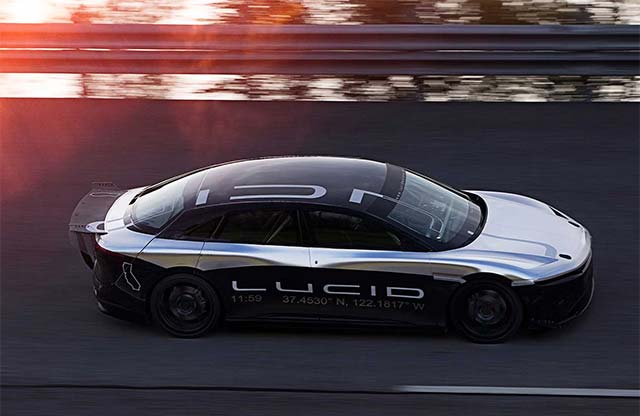 Lucid Motors announced that an Air prototype had completed its first high-speed stability test at 217mph (350 km/h). The Lucid Air also made its auto show debut at the New York International Auto Show.

In preparation for production, Lucid Air alpha prototypes are undergoing a rigorous development program. With winter testing complete, Lucid now turn their testing program to spring and summer activities. They recently designated one of their test prototypes as a high-performance test vehicle and installed a roll-cage for safety purposes. This Alpha Speed Car will be used for evaluating at-the-limit performance.

For the Alpha Speed Car’s first test session, Lucid headed to TRC Ohio’s 7.5-mile oval test track to evaluate high-speed behaviors, including vehicle stability and powertrain thermal management. The test, software-limited to 217mph (350km/h), was successful in demonstrating the capabilities of the car and in finding areas for improvement that could not be properly evaluated in static bench tests.

Real-world tests are an important part of the engineering process, allowing the team to correlate computer simulation models with real-world performance. The collected data will now be used to finesse thermal and aero computer simulations and to make further performance improvements that will be tested later this year at higher speeds.

The Lucid Air will compete with the best vehicles in the biggest markets around the world. In at least one of these markets, there is an expectation of high-speed cruising that Lucid intend to satisfy.

High-speed capability does not compromise our mission to develop a highly efficient vehicle. On the contrary, the focus on maximizing range provides the high power and aerodynamic efficiency that enables higher speeds.

A larger battery, capable of storing large quantities of energy, can release energy at a greater rate. In addition, a larger electric motor is proven to be more efficient than a smaller motor. The result is a wonderful blend of maximum efficiency when needed and blistering performance when desired.

Contrast the Lucid Air with a high-performance fossil-fuel car that becomes less fuel efficient as the power demands increase, regardless of how the car is being driven. For example, the Ferrari LaFerrari, even as a hybrid, has an EPA-certified combined city/highway consumption rating of 14 miles per gallon. The Lucid Air is expected to receive a miles per gallon equivalent (MPGe) rating exceeding 100.

The testing program continues for the Alpha Speed Car and the rest of the Lucid Air alpha fleet.