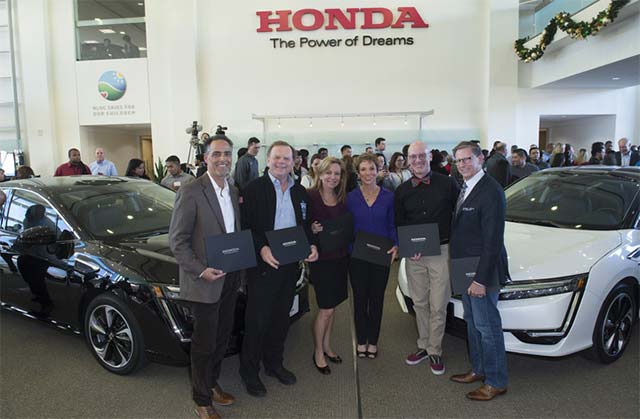 Honda customers leasing the new Clarity Fuel Cell will enjoy all the benefits of driving the advanced zero-emissions vehicle on the road today, including its ultra-low carbon footprint, comfortable seating for five, and $15,000 worth of hydrogen fuel.

In addition, the Clarity Fuel Cell has the highest EPA driving range rating of any zero-emission vehicle in America, including fuel cell and battery electric vehicles, with a 366 mile range and fuel economy rating of 68 combined MPGe (miles per gallon of gasoline-equivalent).

Retail leasing of the Clarity Fuel Cell is now available through Honda’s expanded network of 12 approved dealerships located in select California markets, including six dealerships in Southern California, five in the Bay Area, and one in Sacramento. Honda will further develop its fuel cell vehicle dealer network as the network of public hydrogen fueling stations expands across the state.

The Clarity Fuel Cell is available for the competitive introductory lease price of $369 a month for 36 months with $2,868 due at signing. The lease terms include an attractive mileage allowance of 20,000 miles per year, up to $15,000 of hydrogen fuel, up to 21 days of an Avis Luxury Rental in California, 24/7 roadside assistance, and eligibility for California “White Sticker” single occupant HOV access.

Technological innovations to the Clarity Fuel Cell have created a fuel cell stack that is 33 percent more compact than its predecessor with a 60 percent increase in power density compared to the outgoing Honda FCX Clarity. The more compact fuel cell and integrated powertrain, comparable in size to a V-6 engine, now fits entirely under the hood of the car, allowing for a more spacious cabin with seating for five passengers. The Clarity Fuel Cell features a class-leading driving range rating for zero-emission vehicles with its EPA range rating of 366 miles, with a refueling time of approximately three to five minutes using 70 MPa refueling stations.