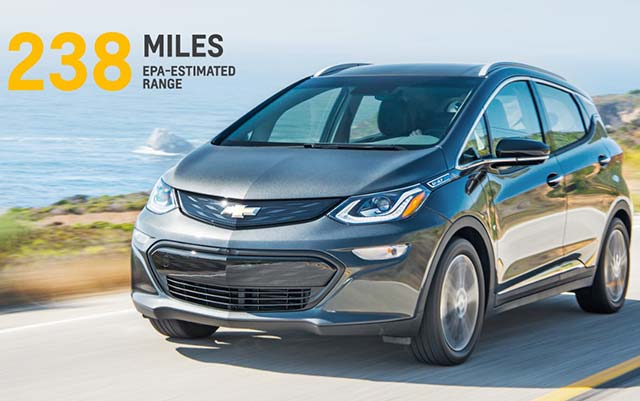 The all-electric 2017 Chevrolet Bolt, which offers an EPA-estimated 238 miles of range on a full electric charge, was named Green Car Journal’s 2017 Green Car of the Year during AutoMobility LA.

Other finalists for the 2017 Green Car of the Year award included the BMW 330e iPerformance, Chrysler Pacifica, Kia Optima and Toyota Prius Prime.

It’s the second triumph of the week for the much anticipated Bolt EV. The Chevy Bolt EV won Motor Trend magazine’s Car of the Year. It was also named a finalist for North American Car of the Year and won a spot on Car And Driver’s coveted 10 Best Cars list.

Along with its distinction as the first production battery electric vehicle to achieve a 200-plus mile driving range, the 2017 Chevrolet Bolt EV offers an array of features that provide a unique and catered ride to the driver. Specifically, the Bolt’s Regen-On-Demand feature allows the driver to use a steering wheel paddle to initiate more aggressive regenerative braking to slow down without using the brake pedal, while transferring electrical energy back to the battery.

The Green Car of the Year is selected through a majority vote by an esteemed jury that includes celebrity auto enthusiast Jay Leno, as well as leaders of noted environmental and efficiency organizations including Jean-Michel Cousteau, President of Ocean Futures Society; Matt Petersen, Board Member of Global Green USA; Dr. Alan Lloyd, President Emeritus of the International Council on Clean Transportation; Mindy Lubber, President of CERES; and Kateri Callahan, President of the Alliance to Save Energy.

During the award’s vetting process, Green Car Journal editors consider all vehicles, fuels and technologies as an expansive field of potential candidates is narrowed down to the final five.  Finalists are selected for their achievements in raising the bar in environmental performance. Many factors are considered including efficiency, performance characteristics, ‘newness,’ affordability and overall environmental achievement. Availability to the mass market is important to ensure honored models have the potential to make a real difference in environmental impact. Finalists must be available for sale by January 1 of the award year.

“The 2017 Bolt EV is a game-changing electric vehicle that delivers long range at an affordable price,” said Steve Majoros, Marketing Director, Chevrolet Cars & Crossovers. “We’re excited to have the Bolt EV arrive to select dealer showrooms later this year and honored to have it named as Green Car Journal’s Green Car of the Year.”

Each year, an expanding number of environmentally positive vehicle models are considered for the Green Car of the Year program, an illustration that the auto industry is continuing to expand its efforts in offering new vehicles with higher efficiency and improved environmental impact. For more than 10 years, Green Car Journal has honored the most influential “green” vehicles at the LA Auto Show and now AutoMobility LA. The Green Car of the Year award is an honor widely recognized as the auto industry’s most important environmental accolade.