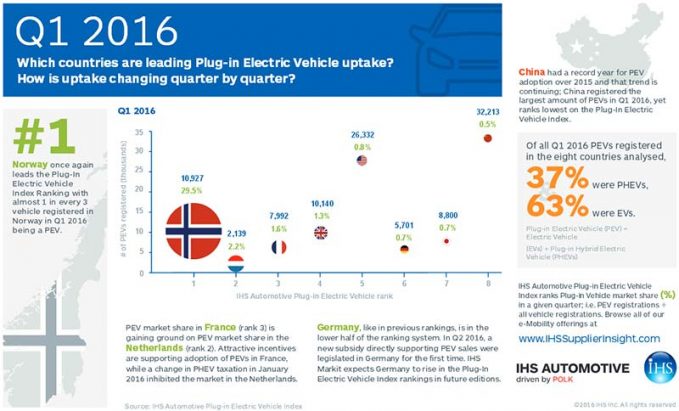 Based on analysis of new vehicle registrations during the first quarter 2016, one out of every three vehicles registered in Norway during the quarter was a plug-in electric vehicle, reflecting more market penetration in Norway than any other major market tracked by IHS Markit within the index. In a previous study from IHS Markit, one in four vehicles registered in Norway during the same timeframe a year ago were a PEV, which demonstrates the continued commitment to alternative propulsion vehicles in this country.

The Netherlands continues to also be a hot market for electric vehicles, but has lost momentum recently and trails significantly behind – with just 2.2 percent share of all new vehicles registered there being electric. France is gaining, with 1.6 percent share. The UK is the only other market tracked with share of more than 1 percent, with 1.3 percent of all vehicles registered there being electric.

Other key markets still remain below a 1 percent average in electric vehicle market share – with the US, Germany, Japan and China ranking further down in the index. While China leads in volume, with more than 32,000 electric vehicles registered during the quarter, its market share for EVs is just 0.5 percent. Additionally, recent announcements by authorities there aimed at potentially curbing the number of EV manufacturers may have an even greater impact on overall production in the region. Likewise, the US also has high volumes, with more than 26,000 units registered during the first quarter, however, just less than one percent of the total market.

Based on IHS Markit research, regional legislative activities have driven the EV movement in certain locations. Norway has historically been supportive with EV incentive programs and other efforts toward adopting green technology.

“Attractive incentives in France are also spurring EV growth there,” said Ben Scott, senior automotive analyst for IHS Markit. “However, a recent change in PHEV taxation in the Netherlands has somewhat inhibited the market in this country.”

German authorities recently enacted a new subsidy for PEVs during the second quarter, and IHS Markit analysts predict an uptick there is on the horizon.

More countries are developing policies for incentives and building charging infrastructure capability, however, they will be unable to sustain these developments alone. Increased production of electric vehicles across the manufacturing base is required to make them more affordable for consumers, in order to allow for substantial growth of these types of vehicles, IHS Markit says.