Audi To Introduce New Electrified Vehicle Each Year Starting In 2018 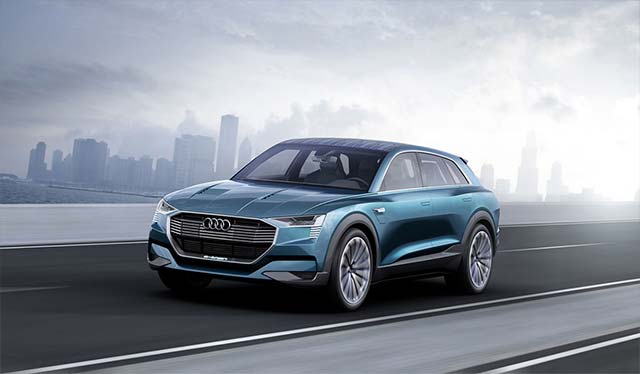 At the annual general meeting in Ingolstadt, Audi’s CEO Rupert Stadler announced that the company will introduce a new electric vehicle model every year beginning in 2018, as it races to catch-up to Tesla and other rivals in the luxury car market.

The new effort will begin with its first all-electric SUV, which will be based on the Audi e-tron quattro concept that debuted in September at the Frankfurt Motor Show.

“Audi is expanding its successful Q family with the sporty SQ7 TDI and the Q7 e-tron quattro, the brand’s second plug‑in hybrid. Its standard fuel consumption is less than two liter per 100 kilometers (better than 117 miles per US gallon). The Q7 e-tron can travel up to 56 kilometers in purely electric mode, meaning that most day‑to‑day journeys can be made without causing any local emissions at all.

Furthermore, Audi is currently preparing for production of its first fully electric large‑series automobile. It will be launched in 2018 as a sporty SUV with a range of more than 500 kilometers (310mile) and will be produced in Brussels. The plant there will also have its own battery production. Starting in 2018, we will launch another electrified car each year,” announced CEO Rupert Stadler.

Audi has historically focused on producing gas and diesel-powered vehicles. The only plug-in hybrid available at present is the A3 e-tron Sportback, which has an electric range of 16 miles as measured by the EPA.

Stadler, who acknowledged that hybrids and plug-in hybrids have been a transitional and bridging technology for the company, also pushed for a global rapid charging network to encourage the switch to electric vehicles.

“We see great potential in fuel-cell technology,” Stadler said, adding that his company’s h-tron quattro concept car operates on electric power with hydrogen as the energy source. “Audi has the leadership for this technology within the Volkswagen Group, and will bring it out of research and towards series development in the coming years.”