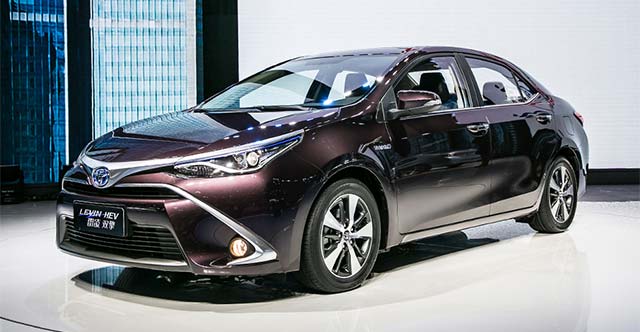 The announcement was made at a media event ahead of the Beijing Auto Show by Hiroji Onishi, head of Toyota’s China operations.

“Our decision to launch plug-in hybrid versions of the Corolla and the Levin reflects the depth of our resolve and commitment to the Chinese market,” Onishi said.

In 2005, based on long-term plans to encourage the widespread use of environmentally-friendly vehicles in the country, Toyota selected China as the first location for production of its hybrid flagship, the Prius, outside of Japan.

These efforts culminated in last year’s launch of the Corolla Hybrid and Levin Hybrid—both of which feature locally developed hybrid units—at the 16th Shanghai International Automobile Industry Exhibition. The debut of these models marked the first time Toyota researched, developed and produced hybrid powertrain components—in this case, the battery, inverter and transaxle—outside Japan.

To continue promoting the widespread use of alternative energy vehicles in the future, Toyota is also proceeding with localization of plug-in hybrid vehicle development ahead of the launch of plug-in versions of these two models in 2018.

Global sales of the Toyota Prius PHV began in January 2012, and by the end of March 2016, a cumulative total of 75,000 units had been sold in Japan, the US, and Europe, with the latest generation Prius PHV set to go on sale in these markets from this fall. With plug-in hybrids representing the new benchmark for environmentally-friendly vehicles in China, the mass-market Corolla and Levin plug-in hybrid models will be launched in 2018.

The plan is aimed at taking advantage of generous purchase incentives made available to Chinese consumers buying plug-in hybrids, along with all-electric cars in China.

To qualify for China’s incentives for plug-in hybrids, Toyota officials at the event said it would have to meet certain conditions. For example, the Corolla and Levin plug-in hybrids for China should be able to run all on electricity for as far as more than 50 km (30 miles) when they are fully charged