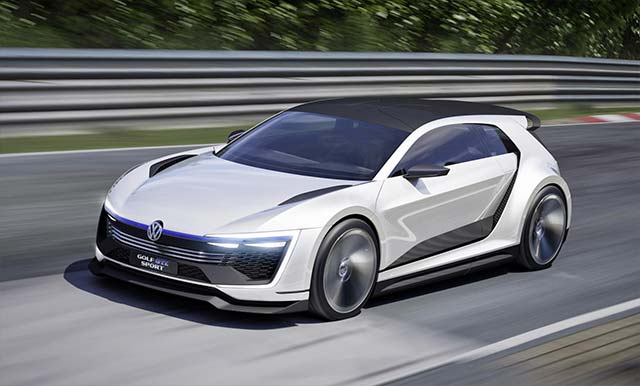 Volkswagen will show the Golf GTE Sport concept for the first time in North America at the 2015 Los Angeles Auto Show.

The Golf GTE Sport concept car blurs the lines between road and motorsport vehicles, because it features the drivetrain, suspension, body and interior of a pure-bred sports car in combination with an advanced plug-in hybrid system that’s capable of zero-emission driving.

The 1.6-liter TSI engine is adapted from the two-time World Rally Championship winning Polo R WRC and delivers 295 horsepower and maximum torque of 295 pound-feet. The four-cylinder engine is assisted by two electric motors, one in the front of the car and one in the rear. The front motor develops 113 horsepower and maximum torque of 243 lb-ft, while the rear motor has the same power output and 199 lb-ft of torque: the total system torque is 494 lb-ft.

Wherever possible, the concept car operates as an electric vehicle. In sporty “GTE mode” all three motors work together, giving the all-wheel-drive Golf GTE Sport a zero to 62 mph time of 4.3 seconds and a top speed of 174 mph. In the NEDC cycle for plug-in hybrid vehicles, the GTE Sport’s fuel economy is an impressive 118 mpg. 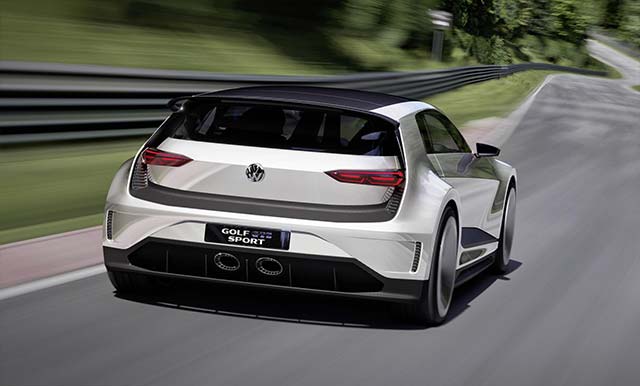 Exterior
The design of the Golf GTE Sport illustrates how Golf GT models could develop in future. The car’s striking silhouette features C-pillars with a unique two-level design.  This C-pillar treatment is not only dynamic from a design standpoint—with the vehicle taking an hourglass shape from front to back—but also functional, as the airstream flows between the two levels and contributes to the aerodynamic downforce and cooling for the rear brakes.

The body of the Golf GTE Sport is largely made of lightweight carbonfiber, following the high-tech example set by other Volkswagen Group vehicles like the Volkswagen XL1 and the Bugatti Veyron 16.4. The concept car is painted in pearlescent “White Club” and has two gullwing doors that swing forwards. The upper part of each door extends into the roof and is entirely made of dark exposed carbonfiber. A three-dimensional side sill is integrated in the door cutout and also enhanced at the top with carbonfiber. Other elements receiving the carbonfiber treatment are the door mirror caps, the door window frames and the lower sill area. The wheelarches are filled with 20-inch aluminum-alloy wheels fitted with 235/35 tires at the front and 275/30 tires at the rear. 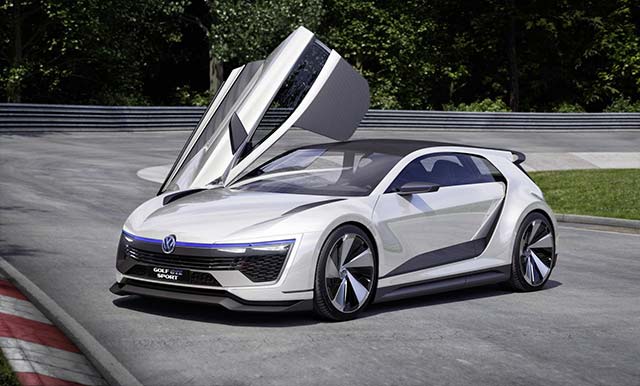 At the front of the car, there’s a blue crossbar running across the width of the vehicle, a cue that is borrowed from the production Golf GTE. Three black chrome crossbars extend across the center air intake under this blue strip. Another air intake below the crossbars is framed at the top and to the sides by a carbonfiber aerodynamic element, while a carbonfiber double spoiler rounds off the front. The high-gloss black grille has the honeycomb structure typical of Volkswagen GT models and C-shaped LED daytime running lights frame the grille at the sides, transitioning into sharp LED headlights.

At the rear, the double C-pillars give the Golf GTE Sport a wide and powerful stance, tapering at an angle to the rear and merging with the bumper. The tailgate is typically Golf with the added detail of a black carbonfiber spoiler. A large exposed diffuser integrates round stainless-steel tips for the twin-pipe exhaust system.

Interior
The interior, clad in carbonfiber and microfiber, consists of two completely separate areas for the driver and passenger. Racing bucket seats with five-point belts are positioned to the rear of the car and the steering column projects further into the interior, like a race car. The motorsport steering wheel includes paddle shifters for the transmission.

On the dash, three transparent instrument displays are arranged behind one another. The display closest to the driver is the smallest and shows the selected gear and the battery status, while the center display shows the power delivered by the drivetrain and the electric boost of the plug-in system. The third display is the largest and has the speed and driving range constantly in the driver’s field of vision. In “GTE mode” the current lap is displayed (i.e. 9 of 16), as well as a virtual indicator of the ideal driving line—valuable assistance for safe and fast driving on racetracks. 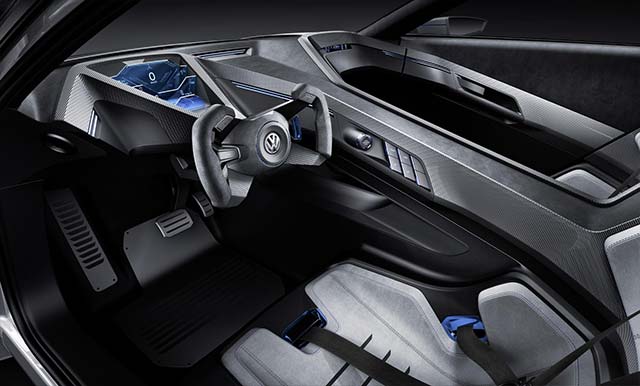 The operating mode switch for selecting “E-Mode”, “GTE-Mode” or “Hybrid-Mode” is situated in the roof, like in a jet plane. The multifunction switch for starting and stopping the hybrid drive system and controlling the six-speed DSG dual-clutch automatic transmission is ideally positioned to the right of the driver for easy access. There is a control panel next to it for further vehicle functions including a button for activating a fire extinguisher system. The passenger side of the vehicle features a display to show current speed, gear and the engine speed in “Info Mode” and acceleration and g-force figures in “Data Mode”.

Drive Modes
In normal operation the Golf GTE Sport drives just as quietly as the production Golf GTE. In “E-Mode” the concept car solely uses the battery to drive emission-free for up to 31 miles on a single charge. When the minimum battery charge is reached, the 1.6 TSI engine is automatically switched on and the Golf GTE Sport drives in “Hybrid” mode. As soon as the battery reaches a certain charge level again, “E-Mode” can be reactivated at any time via a switch in the overhead console. In “E-Mode”, the rear electric motor is primarily responsible for powering the vehicle—when high performance is demanded, the front motor is activated to provide more power.

As soon as the drive system or the driver deactivates “E-Mode”, the Golf GTE Sport becomes a classic full hybrid with regenerative braking to charge the battery. When the driver releases the accelerator pedal, and the battery is sufficiently charged, all drive sources are shut off. If the driver releases the accelerator pedal or brakes, and the battery is insufficiently charged, the two electric motors operate as generators and charge the lithium-ion battery with the energy recovered from braking. The battery’s energy content can be deliberately kept constant by the driver in “Battery Hold” mode or increased with “Battery Charge” mode. When the 1.6-liter TSI engine is the sole source of propulsion, the GTE Sport is a pure front-wheel drive car. 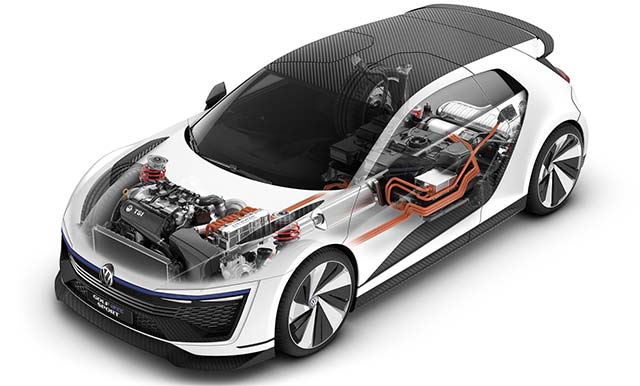 When the driver activates the “GTE” switch, the character of the Golf GTE Sport’s drivetrain changes drastically. The full system power of 395 horsepower is available—the turbocharged 295-hp gas engine is combined with the electric drive components. The Golf GTE Sport sprints from rest to 62 mph in 4.3 seconds.

If necessary, the system’s power can be distributed to all four wheels thanks to the rear electric motor and an “electric propshaft.” In “GTE-Mode” and as soon as the situation necessitates it, the drive power of the Golf GTE Sport is distributed to both axles. In this case (and if battery charge is low), the front electric motor—which is now being supplied with kinetic energy via the gasoline engine—acts solely as a generator and a source of electricity for its counterpart at the rear axle. Since the energy for driving the rear wheels flows by wire and not mechanically, this is referred to as an “electric propshaft.” Because the TSI engine drives the rear electric motor via the front electric motor, the all-wheel drive system also operates when the battery’s charge state is low—an invaluable advantage in terms of driving dynamics.