Audi Declares at Least 25% of U.S. Sales Will Come from Electric Vehicles by 2025 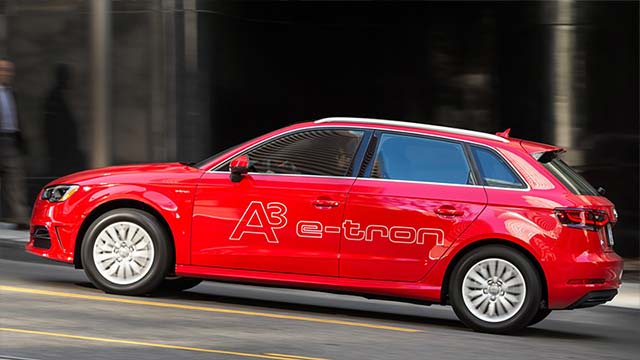 Audi of America President Scott Keogh announced the company’s commitment to achieve at least 25% of U.S. sales from electric vehicles by 2025 as he presented a clear roadmap to electrification in the world’s biggest EV market.

The announcements came out of the Audi presentation at this year’s LA Auto Show.

“With the cars on this stage – the Audi A3 e-tron hybrid plug-in and the Audi e-tron quattro electric SUV – we are, in full force, joining the electric revolution”

Audi will build its position in electric vehicle technology with the launch of the A3 Sportback e-tron plug-in hybrid later this year. It will then accelerate toward its decade-long goal of 25% electric vehicle sales with the production version of the fully electric Audi e-tron quattro concept SUV by 2018, along with other plug-in models to come.

Audi will support the broad adoption of EV technology in the U.S. by developing a nationwide 150 kilowatt fast charging network that would provide an 80 percent charge in only 30 minutes – enough for 200 miles worth of driving in the Audi e-tron quattro. The network will be in place for the launch of the fully electric SUV in 2018.

“With the cars on this stage – the Audi A3 e-tron hybrid plug-in and the Audi e-tron quattro electric SUV – we are, in full force, joining the electric revolution,” said Keogh. “Now is the time to make electric driving more available to the mainstream.”

The A3 Sportback e-tron plug-in hybrid is the first volume-oriented electrified vehicle from a traditional automaker to be available nationwide at launch. That unprecedented scale underscores Audi of America’s commitment to electrification, as does Audi’s support of e-tron owners with multiple options for home and portable chargers, residential solar installation and carbon offsets that immediately complement the plug-in hybrid lifestyle.