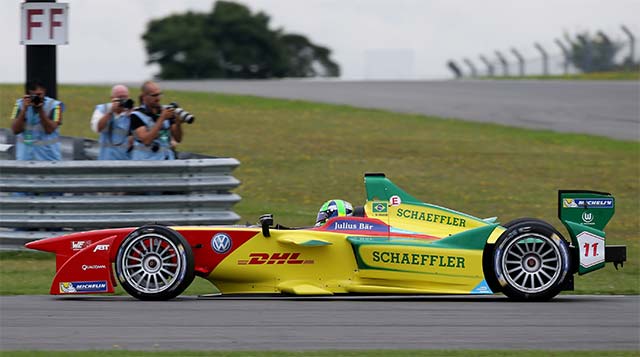 Formula E is headed for its second season. Today and tomorrow, the final pre-season tests are taking place at Donington before the fully electric single-seater cars will be loaded and shipped to Beijing.

When in the heart of the Chinese capital, on October 17, all the red lights are extinguished to start the race, a new era in motorsports will begin for Schaeffler. As the exclusive technology partner of Team ABT Sportsline, the company has developed the powertrain of the new ‘ABT Schaeffler FE01.’

While in Formula E’s inaugural season all the teams were still competing with standard-specification cars, the development of the entire powertrain has been allowed for the 2015/2016 season. Its core element is the electric motor named ‘ABT Schaeffler MGU 01.’ The project was focused on achieving the best possible efficiency, high reliability and optimal thermal management due to modified cooling.

Schaeffler also developed a new stiffer and more compact transmission that is coordinated with the motor and was produced by the company’s renowned partner Hewland according to special specifications. To achieve the goal of minimizing the number of shifting events per lap, the engineers opted for a three-speed variant. The suspension has been optimized as well, now featuring higher stiffness and improved kinematics. The connecting link between all the elements is the newly developed software that manages the interaction between all the components. The perfection of its functionality has been one of the focal aspects of the tests.

With the drivers the squad that has officially been entered under the name of ‘ABT Schaeffler Audi Sport’ and has opted for continuity as well. Sitting in the electric race cars named ABT Schaeffler FE01 will again be Daniel Abt (22) and Lucas di Grassi (31), who took third place in the constructors’ championship in the first season. Lucas di Grassi was in contention for the drivers’ title up to the last of the eleven races. No other race driver mounted the podium during the season as often as the South American sporting the Schaeffler colors.

Following the season opener in Asia, Formula E will be embarking on a world tour of South and North America and Europe. The round in the heart of France’s capital Paris will be new on the calendar. The home round from Schaeffler’s perspective will be held in Berlin on May 21. For the finale, the 20 drivers will be meeting in London on the first weekend in July.