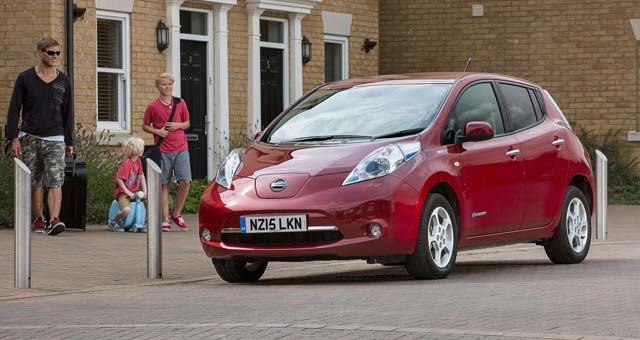 Families could cut as much as 65 percent off monthly fuel bills by making the switch to electric Nissan LEAF. This equates to a saving of £22 each month, for the average UK family.

Equivalent to a family meal, a trip to the cinema or new clothes; the extra cash may well tip the balance when it comes to picking the next family car; according to a recent study by Nissan.

The UK families surveyed rated low running costs and safety as the top priorities when selecting a family car; far ahead of considerations such as comfort or performance.

The findings, part of an expert study commissioned by Nissan to look at electric vehicle (EV) ownership and the role of the family car, surveyed motorists with children across the UK.

And it’s easy to see why; one of the participants, Martin Brady from Dorridge, UK claimed to have saved £2,600 since adopting the Nissan LEAF as the family’s primary mode of transport. He said: “I’d be surprised if it costs me much more than a fiver (£5) a week. I mainly charge at work.”

As many as 89 percent of LEAF drivers charge overnight at home, benefiting from a cost per km of just three cents or less†. This leads to ample savings for the average family, money which is being redeemed against a wide range of items, from solar panels to home improvements.

The first detailed study of its kind into family motoring, the findings showed that all-electric vehicles such as the Nissan LEAF are no longer viewed as the “second car” having quickly become the primary family vehicle.

Shanaya Shah from Borehamwood in Hertfordshire, UK, said: “Initially, we had bought the Nissan LEAF as a second car, but due to its low operating costs and impressive range the LEAF has really proven itself and has become the main family car.”

Commenting on the research, Jean-Pierre Diernaz, Director of Electric Vehicles for Nissan in Europe, said: “As fuel prices continue to fluctuate right across Europe, there’s one thing customers can be certain of – electric cars are incredibly economical.”

He continued: “We’ve seen more and more drivers become disillusioned by the price of motoring in recent years, and this trend will continue unless more families make the switch to electric vehicles.”

The Nissan LEAF is the world’s best-selling pure-electric vehicle amassing approximately 177,000 sales since its launch in 2010. To date, Nissan LEAF owners have covered more than one billion all-electric kilometres.