Toyota Mirai On Sale In Europe By September 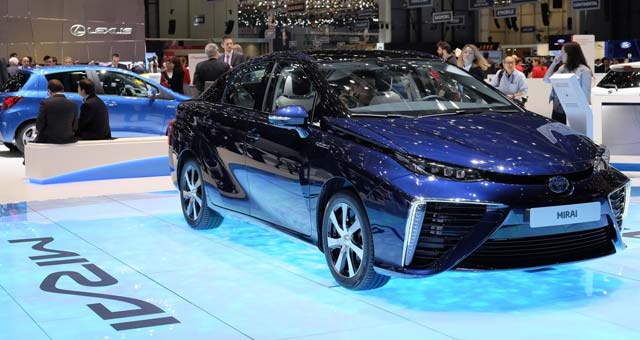 While sales have already started in Japan since last December, the new Toyota Mirai will be launched in Europe by the end of the summer.

Japanese carmaker is expecting annual volume of 50-100 cars/year in 2015 and 2016. The Geneva Motor Show is its first public display in Europe.

The Toyota Mirai signals the start of a new age of vehicles. Using hydrogen – an important future energy source – as fuel to generate electricity, the Mirai achieves superior environmental performance with the convenience and driving pleasure expected of any car.

The Mirai uses the Toyota Fuel Cell System (TFCS), which features both fuel cell technology and hybrid technology, and includes Toyota’s new proprietary FC Stack and high-pressure hydrogen tanks. The TFCS is more energy efficient than internal combustion engines and emits no CO2 or pollutants when driven. Drivers can also expect the same level of convenience as offered by gasoline engine vehicles, with a generous cruising range and a hydrogen refuelling time of about three minutes.