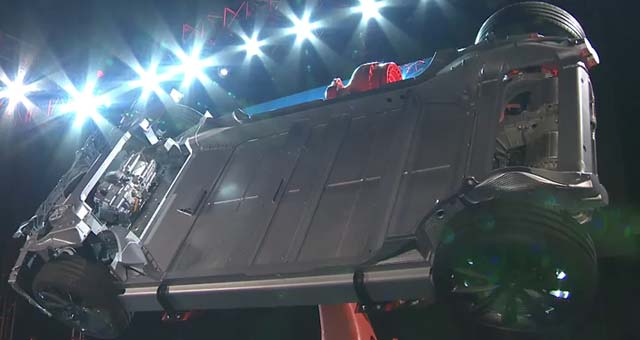 As we reported on Thursday night , after weeks of speculation, Tesla CEO Elon Musk finally gave us the highly-anticipated ‘D’: A dual-motor, all-wheel-drive version of the Tesla Model S.

Tesla will to offer it in all trim levels. It will be called the 60D, 85D or P85D, depending on whether the car has a 60- or 80-kilowatt-hour battery pack and whether the owner opted for the “performance pack.”

The dual-motor option increases the driving range of the Model S by about 10 miles versus the current single-motor, rear-wheel-drive models, allowing the 60D to travel about 225 miles at an average 65 mph, the 85D about 295 miles and the P85D about 275 miles. This is due to efficiencies designed into the new system.

And the “something else” Musk also hinted at previously is a new semi-autonomous system. Thanks to the use of myriad cameras and sensors, it permits the car the ability to change lanes of its own accord when a driver indicates, regulate its speed according to the signposted limits, self-park and perform emergency stops.

The system is upgradable—via software updates—and will offer greater functionality in the future.

Below is the official Tesla Motors blog post and video from the event that highlights most of what was unveiled Thursday night.

Yesterday, we unveiled the world’s first dual electric motor production car and announced that new safety and autopilot hardware is standard on every new Model S.

Conventional all wheel drive vehicles distribute power to the wheels from a single engine driving a complex mechanical transmission system. By contrast, Dual Motor Model S, which comes with either the 60 kWh or 85 kWh battery, has a motor on each axle, digitally and independently controlling torque to the front and rear wheels. The result is unparalleled control of traction, with instantaneous response to the motors giving drivers precisely controlled performance in all conditions. With its digital torque controls and low center of gravity, Dual Motor Model S has the most capable road holding and handling of any vehicle ever produced.

Where gasoline-powered all wheel drive cars sacrifice efficiency in return for all weather traction, Tesla’s Dual Motor propulsion system actually increases efficiency while delivering exceptional traction and control in slippery conditions. By precisely splitting the delivery of current from the battery to each motor, the Model S 85D and 60D actually gain an additional 10 miles of highway driving range compared to their rear motor Model S counterparts.

Consistent with our mission, we also wanted to demonstrate that an electric car can soundly beat gasoline cars on efficiency and pure performance. The Model S P85 already outperforms gasoline-powered cars in the same class with its ability to deliver 100 percent of peak torque from a standing start. We combined our new front drive unit and our P85 rear motor with the objective of outperforming one of the greatest supercars of all time, the McLaren F1. With P85D’s 0 to 60 mph performance of 3.2 seconds, we have succeeded.

The P85D combines the performance of the P85 rear motor with an additional 50 percent of torque available from our new front drive unit. The result is the fastest accelerating four-door production car of all time – while remaining one of the most efficient cars on the road. That’s a combination that can only be achieved by an electric car. Not only is the P85D a match for the McLaren F1, but it also doesn’t need a professional driver to achieve optimum performance. Just plant your foot and go.

Customers can order a Dual Motor Model S today. Deliveries of P85D begin in December for North America, to be followed 85D and 60D in February. Deliveries to Europe and Asia will follow in the months afterwards.

New Safety Features and Autopilot
The launch of Dual Motor Model S coincides with the introduction of a standard hardware package that will enable autopilot functionality. Every single Model S now rolling out of the factory includes a forward radar, 12 long range ultrasonic sensors positioned to sense 16 feet around the car in every direction at all speeds, a forward looking camera, and a high precision, digitally controlled electric assist braking system.

Building on this hardware with future software releases, we will deliver a range of active safety features, using digital control of motors, brakes, and steering to avoid collisions from the front, sides, or from leaving the road.

Model S will be able to steer to stay within a lane, change lanes with the simple tap of a turn signal, and manage speed by reading road signs and using active, traffic aware cruise control. It will take several months for all Autopilot features to be completed and uploaded to the cars.

Our goal with the introduction of this new hardware and software is not to enable driverless cars, which are still years away from becoming a reality. Our system is called Autopilot because it’s similar to systems that pilots use to increase comfort and safety when conditions are clear. Tesla’s Autopilot is a way to relieve drivers of the most boring and potentially dangerous aspects of road travel – but the driver is still responsible for, and ultimately in control of, the car.

The Autopilot hardware opens up some exciting long term possibilities. Imagine having your car check your calendar in the morning (a feature introduced in Software v6.0), calculate travel time to your first appointment based on real time traffic data, automatically open the garage door with Homelink, carefully back out of a tight garage, and pull up to your door ready for your commute. Of course, it could also warm or cool your car to your preferences and select your favorite morning news stream.

The introduction of this hardware is just the first step for Autopilot in Model S. We will continue to develop new capabilities and deliver them through over-the-air software updates, keeping our customers at the forefront of driving technology.

Other Product Updates
Our commitment to continuous improvement extends to other features of Model S, and we have recently made several updates to the car. The following features are either in production or will be delivered with Dual Motor Model S (as indicated).