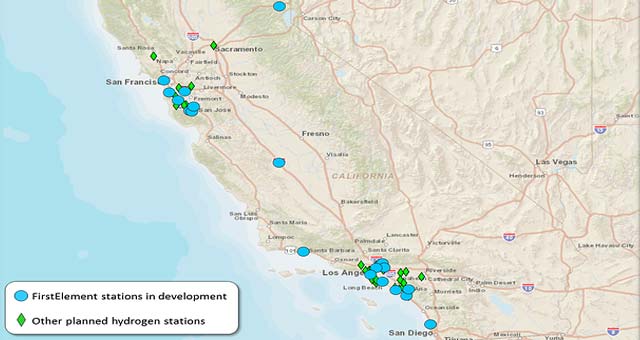 FirstElement Fuel, a company developing the world’s first retail hydrogen network, announced that it finalized a $25.5 million contract with Air Products for hydrogen station equipment marking the largest deal ever of its kind.

The contract signals FirstElement’s transition from planning to building the first phase of California’s hydrogen network. Earlier this summer FirstElement Fuel signed on Black & Veatch for engineering and construction after formerly receiving grants from the California Energy Commission as well as financial backing from Toyota to build 19 hydrogen charge points throughout the state in 2015.

FirstElement’s goal is to provide a seamless, no-compromises driving experience for customers of all-electric fuel cell vehicles by creating a network of hydrogen stations. The company is starting in California where automakers including Toyota, Honda, Mercedes-Benz, and Hyundai are commercializing fuel cell vehicles as early as 2014.

FirstElement’s hydrogen network will initially be focused in California’s San Francisco Bay Area and Los Angeles regions with a few access points located at connectors and destinations to enable driving throughout the state.

The company’s focus on the retail customer means that removing range anxiety and assuring 100% reliability are a must. FirstElement selected Air Products in part because of their performance track record. “24/7 reliability and safety are the top concerns for meeting customer expectations as we make this transition from demonstration to fully retail hydrogen fueling,” said Ewanick. Additionally, the retail dispensers for FirstElement’s 19 initial stations are based on a proven product line that will provide users with a familiar fueling experience. At the same time FirstElement is working with Bennett Pump Company on a unique look and design for the dispenser.

Air Products will also supply hydrogen to FirstElement’s initial 19 stations. According to Ewanick there is a high level of confidence in the reliability of Air Products’s hydrogen supply in the California marketplace.[wzslider height=”400″ lightbox=”true”]