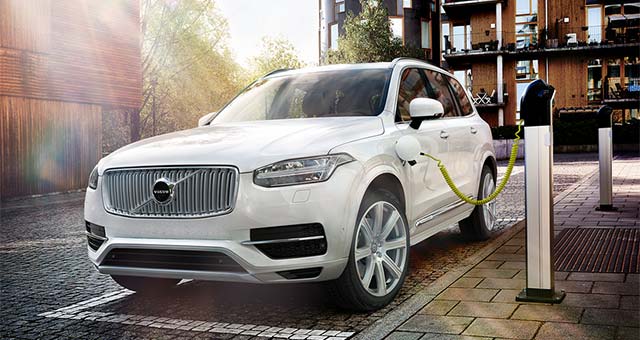 Three years in the making and part of an $11 billion investment program, the all-new Volvo XC90 marks the beginning of a new chapter in Volvo’s history, capturing its future design direction, incorporating its own range of new technologies and utilizing its new Scalable Product Architecture (SPA) technology.

Volvo’s new face
Symbolizing this historic day in Volvo’s 87 year history, the new XC90 will be the first of its cars to carry the company’s new more prominent iron mark logo, which has the iconic arrow elegantly aligned with the diagonal slash across the grille. Together with the T-shaped “Thor’s Hammer” LED daytime running lights, the iron mark introduces an entirely new, distinctive and confident face for Volvo’s forthcoming generation of cars.

The XC90’s larger hood with its new topography, the beltline and the sharpened shoulders connecting with the tattoo-like, new rear lights are other important design signatures that will be mirrored across the range.

To add more visual muscle from the sides, the XC90 comes with a range of wheel sizes up to 22 inches.

First SUV without compromises
The XC90 is firm evidence of the “designed by Volvo for Volvo and its customers” strategy. Its outstanding combination of luxury, space, versatility, efficiency and safety will bring the luxury SUV segment into a new dimension, just as the original XC90 achieved in 2002.

The top of the range XC90 Twin Engine plug-in hybrid, which combines a two-liter, four- cylinder supercharged and turbocharged petrol engine with an electric motor, offers an unrivalled combination of power and clean operation: around 400 horsepower with carbon dioxide (CO2) emissions of around 60 g/km (NEDC driving cycle). This will be the world’s first 7-seat plug-in hybrid.

In a run-off road scenario, the all-new Volvo XC90 detects what is happening and the front safety belts are tightened to keep the occupants in position. To help prevent spine injuries, energy-absorbing functionality between the seat and seat frame cushions the vertical forces that can arise when the car encounters a hard landing in the terrain.

The XC90 is the first car in the world with technology that features automatic braking if the Volvo driver starts to turn in front of an oncoming car that is going quicker than expected. This is a common scenario at busy city crossings as well as on highways, where the speed limits are higher.

City Safety becomes the umbrella name for all of Volvo Cars’ auto brake functions, which are standard equipment in the all-new XC90. It now covers vehicles, cyclists and pedestrians in front of the car, day and night.

Luxurious interior
The XC90’s interior is the epitome of Scandinavian luxury. The most striking feature is a tablet-like touch screen control console, which forms the heart of an all-new in-car control system. This system is virtually button free and represents an entirely new way for drivers to control their car and access a range of Internet-based products and services. It also helps create an interior that is modern, spacious and uncluttered.

The new XC90 interior combines materials such as soft leather and wood with handcrafted details, including a gear lever made of crystal glass from Orrefors, the famous Swedish glassmaker, and diamond-cut controls for the start/stop button and volume control. Craftsmanship has been in sharp focus during the whole development work.

The genuine seven seater features new, innovatively designed seats that also free up interior space for passengers both in the second and third seat rows. The third row seats were designed to accommodate passengers in class-leading comfort up to 5’7″ inches tall.

The top-of-the-line system in the XC90 features a 1,400 Watt Class D amplifier and 19 Bowers & Wilkins speakers. It also includes one of the first air-ventilated subwoofers in a car. Integrated into the car body, it turns the whole interior space into a giant subwoofer.

The latest sound processing software has been used to manage the timing of the sound and co-ordination of the speakers. This brings the emotional experience of a world-class live performance into the car.

Two main accessory themes
The all-new XC90 is available with a range of accessories that makes it possible for the owner to create a truly personalized car. There are two major exterior styling themes:

Pricing
Full details on the pricing will be announced at a later date, but a well-equipped XC90 T6 AWD will have a starting price of $48,900. The XC90 T6 AWD will come standard with such luxurious features as Navigation, 19″ wheels, a power laminated panoramic sunroof, state- of-the-art car connectivity and is expected to deliver best-in-class power and fuel efficiency.

Volvo Cars is releasing a limited First Edition of its all-new Volvo XC90, which was launched today in Stockholm. The 1,927 individually numbered cars celebrate the year Volvo was founded and, for the first time in history, they will only be available for order via digital commerce at www.volvocars.com/us.

The online store opens for business on September 3rd at 10:00 am ET.

The online only First Edition is just one example of Volvo Cars’ revitalized approach to marketing activities and outstanding personal service.

Fully equipped
The First Edition cars have uniquely numbered tread plates, a distinctive badge on the tailgate, a leather key fob with the First Edition logo, and are powered by a high- performance gasoline engine from Volvo Cars’ new four-cylinder Drive-E powertrains.

The supercharged and turbocharged T6 AWD has an output of 316 hp and a maximum torque of 295 lb.-ft. The engines are teamed with a smooth 8-speed automatic transmission.

The 4-corner air suspension includes Four-C, an electronically controlled damping system. There is a choice of five modes, including one where the driver is free to tailor the settings to his or her personal taste.

The tablet-like touch screen in the center is one of the most striking features in the all-new XC90. It is the heart of the all-new in-car control system that is virtually button free and represents an entirely new way for drivers to operate their car and access a range of Internet-based products and services.

The Bowers & Wilkins audio systems features a 1,400 watts Class D amplifier, 19 speakers, one of the first air-ventilated subwoofers integrated in a car and the latest sound processing software, which brings the emotional experience of a world-class live performance into the car.