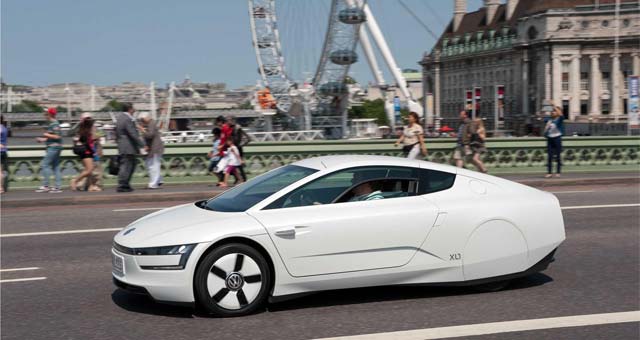 Volkswagen has announced pricing for its record-breaking XL1 model, the world’s most energy efficient production vehicle, which is now available to UK customers at £98,515.

A total production run of around 200 XL1s are being built at Volkswagen’s Osnabrück factory in Germany, a proportion of which will be made available for the UK.  The first delivery was made to a German customer at the end of May, with a number of UK customers already in line to purchase a car.

The Volkswagen XL1 was on display at last weekend’s Goodwood Festival of Speed, turning heads on the Volkswagen stand, and making its way up the iconic hill among a host of other supercars.

The design brief for the XL1 was to produce a ‘one litre’ car – that is to say, a car that uses one litre of fuel per 100 km, equivalent to 282 miles per gallon.  The resulting vehicle uses just 0.9 litres per 100 km, or 313 mpg on the official combined cycle, and this high mpg figure correlates to a very low carbon dioxide emissions value of just 21 g/km.  This is achieved using a two-cylinder 48 PS 800 cc diesel engine with a 27 PS electric motor, driving through a modified seven-speed DSG transmission.

The XL1 was also aerodynamically optimised, adopting the classic ‘tear drop’ shape and utilising innovations such as removing traditional wing mirrors and replacing them with small cameras called e-Mirrors which transmit exterior images to interior displays.  With a drag coefficient of 0.189 the XL1 can maintain 100 kmh on a level road in still air using just 8.4PS.

It looks like a vision of the future, sitting very low on the road, and features scissor-opening wing doors.  Its striking and innovative yet highly functional design helped it win the Transport category of the Designs of the Year 2014 competition, and an XL1 remains on display at the DesignMuseum in London until 25 August.

Commenting on the XL1, Product Manager Lianne McKnight said: ‘Enthusiasm for the XL1 has been building since the first concept of the car was unveiled in Qatar in January 2011.  Knowing that production of our cars is now underway and that customers will soon be taking delivery of them is very exciting.  We’re looking forward to seeing this record-breaking model on UK roads, as well as seeing technologies within it filtering down to many of our mainstream Volkswagen cars.

‘To achieve its benchmark efficiency goals with materials and technology available today required a radical approach.  Each XL1 customer is therefore able to own an example of the type of car we may be driving in 15 years time, and benefit today from the investment that a company like Volkswagen makes in its future,’ she added.