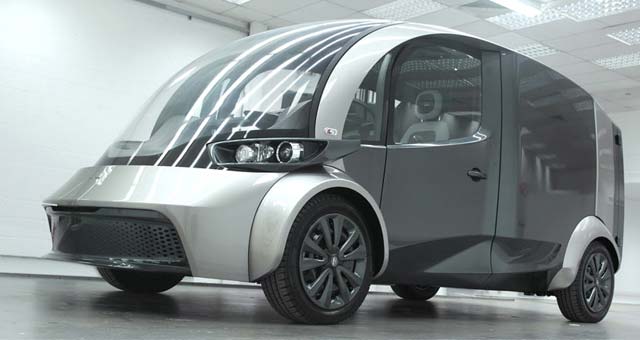 Liberty Electric Cars has completed the build of the first fully functioning example of “DELIVER”, an electric delivery vehicle funded by the European Commissions’ 7th Framework Program which brings together ten partner companies from across Europe.

DELIVER will have its world Premiere at FISITA World Automotive Congress, which starts on 2nd June 2014 in Maastricht (NL).

The DELIVER project started in November 2011 with the goal to reduce the environmental impact in urban areas by 40 % and thus design and construct an electric light commercial vehicle which perfectly combines the needs of inner city traffic with the advantages of electric vehicles.

The result is a light weight commercial vehicle of 2,200 kg GVW and a payload of 700 kg, with a host of innovative features for the delivery driver and 18% additional capacity when compared with today’s vans of a similar wheelbase. The concept deploys the latest electric vehicle technologies with its fully electric drive train featuring in-wheel motors with 2-speed transmission and 80 prismatic Li-NMC cells in its battery pack to increase energy efficiency and total range.

Thanks to its flexible ergonomic cabin concept and removal of the B pillar on the kerb side, there is a decrease in both workload and the duration of the delivery process itself.

The ability for the driver to easily exit the vehicle on the kerb side not only minimises walking distances around the vehicle, but improves driver safety. The “Walk in door” concept reduces potential obstacles caused by the door sills. With a minimum range of 100 km (62 miles) and a top speed of 100 km/h (62 mph), DELIVER represents an attractive proposition for light commercial vehicles with urban and intra urban applications such as postal, parcel, supermarket and city council service operations.

After executing a broad conceptual design study which started by establishing initial design specifications and continued right through to the detailed virtual performance assessment of the final fully electric vehicle concept, a driving demonstrator concept vehicle was built by Liberty Electric Cars to demonstrate as many of the new vehicle innovations as possible.

The project, which is co-funded by the European Commission as part of the European Green Vehicles Initiative, is coordinated by Institute for Automotive Engineering (ika) of RWTHAachenUniversity and gathers ten partners from across Europe, including major OEMs, research partners and cities’ representatives. The consortium comprises Fiat (IT), Volkswagen (DE), Liberty Electric Cars (UK), Michelin (CH), Polis Network (BE), SP – Technical Research Institute of Sweden (SE), HPL Prototypes (UK) as well as CADEM (TR) und Mobit (TR).