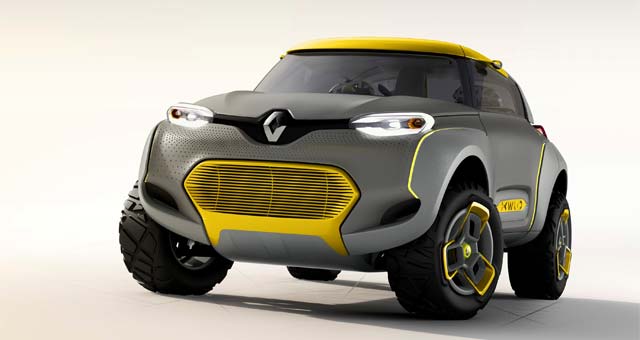 KWID Concept, a concept car unveiled at the Delhi Auto Show, highlights both Renault’s commitment to new markets, such as India, as well as the company’s ability to produce appealing products in the compact car segment.

The vehicle’s robust design, along with its technology-driven features, is targeted at meeting the needs of young customers in these markets.

The KWID Concept was designed with inputs from Renault Design India and is covered by the ‘Explore’ petal of Renault’s lifecycle-based design strategy. The vehicle’s exciting proportions and dimensions as well as very short overhangs give the impression of a bouncing vehicle, while its oversized wheels protrude past the fenders and make the KWID Concept look like a buggy car.

The playfulness of the vehicle’s exterior design is offset by a robust appearance due to its protective guards and chunky wings, which exude an impression of strength. The vehicle comes with a two-wheel drive transmission, but projects the facade of an off-road car.

The interior of the KWID Concept is designed to serve as a snug cocoon and is inspired by a bird’s nest. The vehicle’s seats, suspended over a solid base in white, give an impression of lightness, while their 2-tone elastomer material provides a sense of brightness. The KWID Concept also features rear air conditioning with controls on the driver seat’s back as well as ventilation through concentric perforations. The dashboard is an integrated tablet for commanding the navigation of the Flying Companion.

Beyond the playful and imaginative styling of the KWID Concept, the concept car also comes equipped with a host of technology-driven features, led by its Flying Companion. Aimed at offering a safe as well as fun driving experience, the Flying Companion is the first of its kind in the automotive world. Taking off from the rotating rear portion of the KWID Concept’s roof, the Flying Companion can be operated in one of two modes – the automatic mode using a pre-programmed flying sequence and GPS location as well as the manual mode, which enables the companion to be controlled using a tablet inside the vehicle. The Flying Companion can be used for a variety of purposes, including scouting traffic, taking landscape pictures and detecting obstacles on the road ahead.

The KWID Concept is also Z.E ready – being pre-disposed to receive batteries for electric use – and comes with a charging plug behind the Renault logo. The KWID Concept is powered by the latest-generation downsized 1.2-litre petrol turbocharged engine mated to dual-clutch transmission EDC to combine driving enjoyment with low fuel consumption. Other technology-rich features include electric operated front bench seat on a center rail, electric opening doors, LED lighting, lack of gearshift (command with touches next to the steering). The vertically-mounted TFT touchscreen display acts as the dashboard in the KWID Concept and also provides access to connected services.