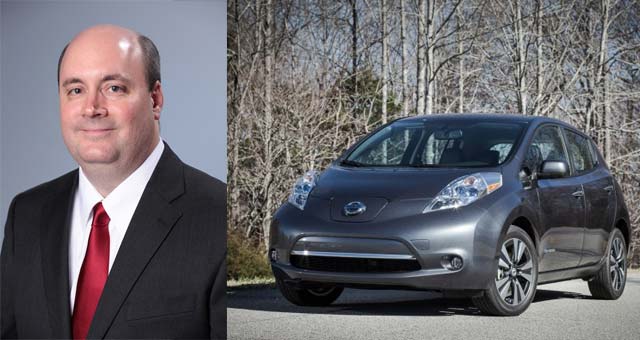 Nissan has named Toby Perry to the position of director, Electric Vehicle Sales and Marketing.

Toby Perry, 43, became director, electric-vehicle sales and marketing on Feb. 3. He replaced Erik Gottfried, 37, who had been in the post less than a year.

Most recently, Perry was senior manager of Business Strategy Execution. Since joining Nissan in 1995, he has held a number of sales and marketing positions with increasing responsibilities in the United States and Europe. Perry holds a bachelor’s degree in international business and marketing from Bradley University.

“With Toby’s nearly 20 years at Nissan, the breadth of industry knowledge he brings to this role will be invaluable as we aim to increase visibility of Nissan LEAF in new markets,” said Fred Diaz, senior vice president, Nissan Sales & Marketing, Parts & Service, U.S.A. “As the conversation around EVs evolves and Nissan LEAF sales continue to accelerate, we’ll rely on his well-rounded experience to keep the momentum going.”

Nissan, a leader in EVs with the all-electric LEAF, has broken LEAF sales records for 11 consecutive months. On the heels of LEAF’s success, Nissan is introducing its second global, all-electric vehicle, e-NV200. In 2014, Nissan will launch e-NV200 in Europe followed by its debut in Japan. Nissan is partnering with FedEx Express, a subsidiary of FedEx Corp., to test the all-electric compact cargo vehicle in the United States, which marks e-NV200’s first run in North America.