Nissan and FedEx to TEST e-NV200 in Washington D.C. 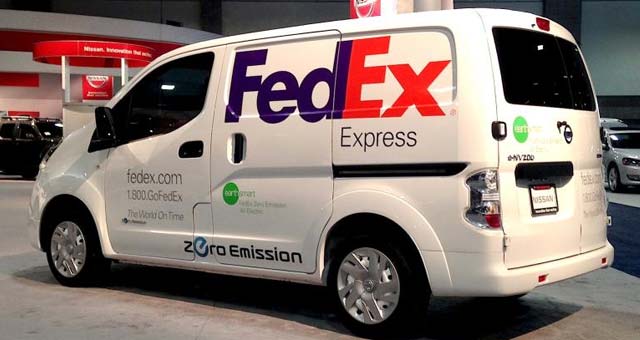 FedEx Express and Nissan announced at the Washington Auto Show that the two companies will begin testing the Nissan e-NV200 under real world conditions in Washington, D.C.

This test marks the first time the Nissan e-NV200 will be running in North America. FedEx Express and Nissan have conducted similar e-NV200 tests with fleets in Japan, Singapore, the United Kingdom and Brazil.

Rotating the Nissan e-NV200 into the delivery fleet is part of the FedEx EarthSmart program, a global sustainability platform designed to guide the company’s environmental commitment in the communities where it operates.  For Nissan, this effort aligns with its “Blue Citizenship” corporate social responsibility program with a focus on increasing the number of vehicles that emit no greenhouse gases by exploring additional vehicle segments where its leading electric vehicle technology may be applied.

FedEx will deploy the Nissan e-NV200 in the Washington, D.C. area, where it will undergo field tests that subject it to the routine requirements of a delivery vehicle. The results will be used to help determine the viability of using an electric vehicle in this role in the U.S. Nissan e-NV200 is scheduled to begin mass production later this year in Europe.

Following Nissan LEAF, e-NV200 will be the second EV that Nissan markets globally. The all-electric compact cargo vehicle strengthens Nissan’s leadership in zero emission mobility. The 100 percent electric model offers the same versatility, functionality and roominess as its gasoline-powered sibling. The e-NV200 delivers unique, emission-free and quiet performance thanks to a powertrain based on Nissan LEAF and the same advanced lithium-ion battery. It emits no carbon dioxide, compared to approximately 140 g of CO2/km emitted by gas-powered engines in a similar vehicle. The e-NV200 can be charged up to 80 percent of its full capacity in less than 30 minutes when equipped with a quick charge port and using a fast charger.

With front-wheel drive, the e-NV200 provides rapid and smooth acceleration and excellent handling with a high degree of maneuverability. The electric vehicle delivers immediate torque, which benefits acceleration with a heavy payload from a dead stop. The e-NV200 offers the low cost of ownership that EVs such as LEAF boast—based on fewer maintenance requirements and the reduced cost of charging versus fueling. The smart positioning of the battery ensures a larger cargo area, and the vehicle maintains a low load floor, key considerations for light commercial vehicles.

FedEx Express currently has 167 electric vehicles and 365 hybrid electric vehicles in the United States, France, Germany, Italy, Japan and China, including the units that will be deployed in Brazil starting in January. By the end of this fiscal year (May 31, 2014), the company plans to increase these numbers to 222 and 393, respectively. From 2005 to 2012, the introduction of this type of vehicle in the fleet enabled the company to save nearly 2.4 million liters of fuel.

Initiatives like this, aligned with others, such as matching the right vehicle to the right route, buying vehicles with the right-sized engines and inclusion of light vehicles into the fleet, have allowed FedEx to quickly progress towards its goal of increasing the fuel efficiency of its fleet, which the company revised in the beginning 2013 by increasing its initial improvement target from 20 percent to 30 percent by 2020.