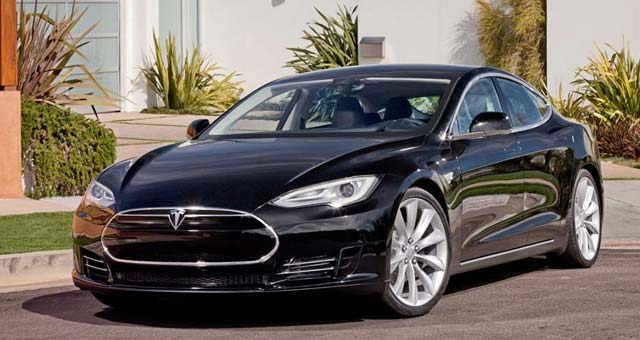 It’s no secret that the Tesla Model S is the newest “must-have” toy among America’s most affluent citizens.

But a shocking analysis from Edmunds.com finds that in some of the country’s richest communities, the Model S sells better than any other car on the market.

According to Edmunds.com’s analysis of new car registration data from Polk, the Model S is the top-selling vehicle this year in eight of America’s 25 wealthiest ZIP Codes. The analysis further finds that all eight communities are located in California.

Leading the way is Atherton, CA, where the Model S accounts for 15.4 percent of all new car registrations within its borders. According to Forbes, Atherton, which sits adjacent to Tesla’s Palo Alto headquarters, is the wealthiest zip code in America, with a median home price of $6,665,000.

While the analysis shows that the richest populations are snatching up Teslas now, Edmunds.com says that the data offers hints about Tesla’s potential to appeal to a broader range of  buyers.

“It’s a classic pattern for any retail product, including cars: the wealthy and influential buyers set a trend, and the mainstream aspires to follow,” says Edmunds.com Sr. Analyst Jessica Caldwell. “As Tesla increases the number of models and improves its price points, it could find itself in demand by more than just those in these wealthy enclaves. After all, luxury car companies typically find the most volume in their entry-level vehicles.”

Tesla has made it clear that its next frontier is to make its vehicles more affordable to the mass market. In May, Tesla CEO Elon Musk shared that he hopes to offer a vehicle to car shoppers for under $40,000 within the next four years.

If Tesla does plan to break through to new buyers, it will have to expand its appeal outside of California’s borders. Edmunds.com’s analysis found that Tesla’s market share exceeds 1.0 percent in only one of the non-California zip codes ranked in the top 25 by Forbes (#19 Water Mill, NY with 1.2% of all new car registrations in 2013, through August). The Model S national market share sits at just 0.1 percent. 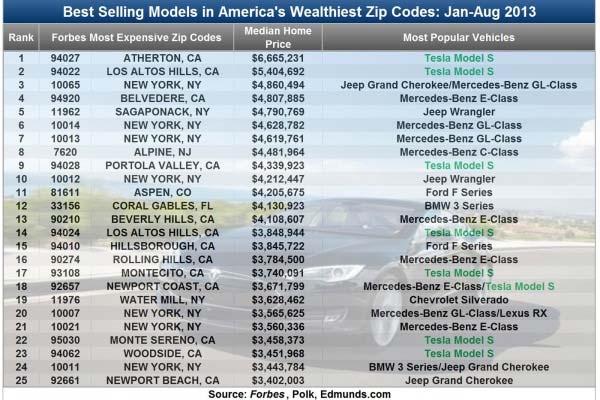