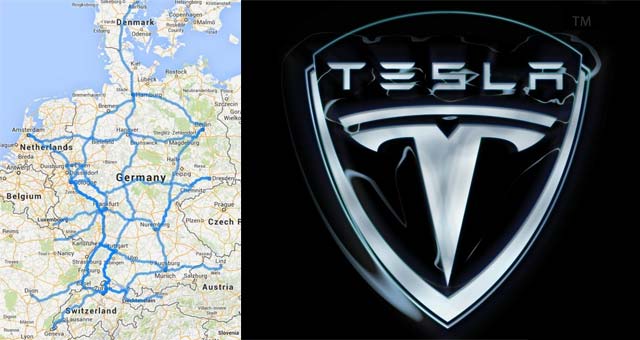 Elon Musk, CEO of Tesla Motors, visited Munich and Berlin this week to announce three major developments for Model S customers in Germany as Tesla increases European deliveries throughout the fourth quarter and ramps up further in 2014.

“Tesla is going to make a significant investment in Germany,” said Musk. “This is a country that appreciates automotive engineering, which makes it extremely important to us. To have the Model S be well received as it enters the German market is a key step for Tesla.”

Elon Musk speaking at a press conference in Munich, Germany.


The first major investment is the accelerated deployment of Superchargers in Germany.

Second is that Tesla Motors will rapidly expand the number of service centers in Germany to ensure superior vehicle service and customer support to Model S owners. Five more service centers are planned to open in Germany by the end of this year, and 80 percent of Germans will live within 100 km of a Tesla service center by the end of 2014. This proximity and convenience will facilitate exceptional responsiveness to Tesla customers throughout Germany.

Model S was built to be the best car in any country in the world, and in Germany this requires the highest caliber performance on the Autobahn. So Tesla’s third announcement is that there will be free optional high speed tuning for Model S in Germany to optimize it for driving on the Autobahn. This custom tuning will be available to all customers in Germany, including retrofitting Model S that have already been delivered and are on the road.