Volkswagen e-load up! Unveiled in Frankfurt 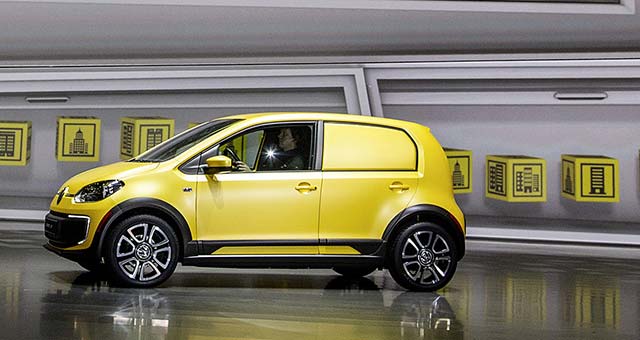 At this year’s Frankfurt Motor Show, Volkswagen has unveiled the e-load up!, a commercial van concept based on the electric Volkswagen e-up!.

The Volkswagen e-load up! may be just 3.54 meters long, but it’s ideally suited to inner city couriers, pizza deliveries or social service.  The e-load up! is a highly flexible little vehicle with a seat for the driver, a fold-up passenger seat and over 1 m3 of space in the back.

Compared to the e-up! the cargo capacity of the e-load up! has gone up from 951 to over 1,400 liters. This urban delivery van weighs 1.164 kg and can carry a total load of 306 kg – which certainly ought to be enough for any pizzas or parcels!

It is powered by an almost silent electric motor with maximum power output of 60 kW / 82 PS. Continual output is 40 kW / 55 PS. Its maximum torque of 210 newton meters is available from the very first revolution. It thus accelerates from 0 to 100 km/h (0-62 mph) within 12.4 seconds and reaches a top speed of 130 km/h (80 mph). The lithium-ion battery integrated into the floor has a storage capacity of 18.7 kWh. Thanks to the low vehicle weight, the e-load up! can travel up to 160 kilometers (99 miles) (NEFC) on a single charge.

As in the e-up! model, the interface for charging the battery in the e-load up! is concealed under the ‘fuel cap’. Available as an option is the CCS combined charging system standardized by Volkswagen and other manufacturers. It supports both direct and alternating current charging, so that the vehicle can be charged at the majority of charging stations, regardless of electricity source or charging speed on offer. In this way the e-load up! can be back to 80 percent of its battery capacity in just 30 minutes.[wzslider height=”400″ lightbox=”true”]