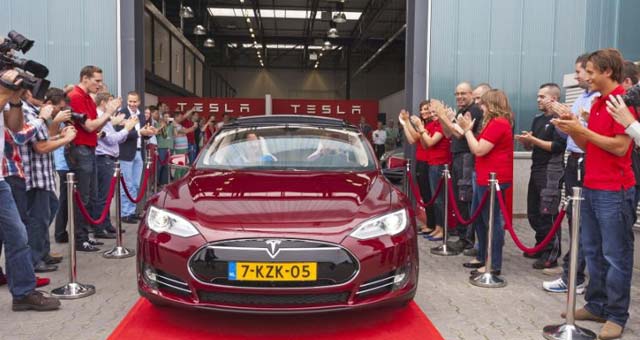 The Tilburg facility will serve as the final assembly and distribution point for Model S vehicles sold in Europe as well as Tesla’s European service and parts headquarters. Some of the very first Dutch, Belgian, French and German Model S customers received their cars today at the brand new facility.

With a size of 18,900 square meters, this new state-of-the-art facility is well prepared to receive the brand new Model S which is shipped over from the US. Having crossed the ocean and reached Europe, Model S arrives at the Tilburg plant for final assembly before being delivered across the continent.

Being centrally located in Tilburg enables efficient, timely and cost effective operations throughout Europe. Parts can be distributed to anywhere across the continent within 12 hours. Tilburg is an ideal location considering its proximity to the port of Rotterdam and the high quality and availability of transportation infrastructure. An excellent rail and motorway network connects Tilburg to all major markets.

Deliveries of Model S to European customers started in Norway earlier this month, and today, it was time for the first Dutch, Belgian, French and German customers to receive their cars at the brand new Tilburg facility.

Bryan Batista, Sales Director Europe, said: “It’s very exciting to see our cars arriving in Europe and being welcomed by their proud owners here in Tilburg. This location is pivotal to Tesla’s European operations, which are expanding rapidly over the coming months with openings of around 15 new stores and service centres.”