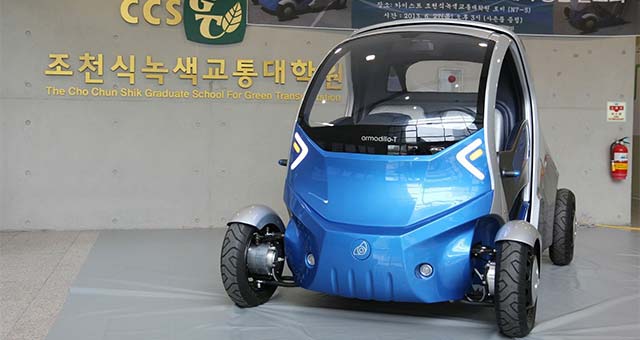 Looking for a parking space for hours at a busy shopping mall or being stuck on roads jammed with cars releasing large amounts of carbon dioxide are all-too-familiar scenes for city dwellers.

A group of researchers at the Korea Advanced Institute of Science and Technology (KAIST) recently developed a possible solution to such problems: a foldable, compact electric vehicle that can be utilized either as a personal car or part of the public transit system to connect major transportation routes within a city.

In-Soo Suh, associate professor of the Graduate School for Green Transportation at KAIST, and his research team introduced a prototype micro electric car called “Armadillo-T,” whose design is based on a native animal of South America, the armadillo, a placental mammal with a leathery armor shell.

The research team imitated the animal’s distinctive protection characteristic of rolling up into a ball when facing with threat from predators. Just as armadillos hide themselves inside the shell, Armadillo-T tucks its rear body away, shrinking its original size of 2.8 meters (110 inches) down to almost half, 1.65 meters (65 inches), when folding.

Armadillo-T is a four-wheel-drive, all-electric car with two seats and four in-wheel motors. Since the motors are installed inside the wheels, and the 13.6 kWh capacity of lithium-ion battery pack is housed on the front side, the battery and motors do not have to change their positions when the car folds. This not only optimizes the energy efficiency but also provides stability and ample room to drivers and passengers.

Once folded, the small and light (weighs 450 kg) electric vehicle takes up only one-third of a 5-meter parking space, the standard parking size in Korea, allowing three of its kind to be parked. With a smartphone-interfaced remote control on the wheels, the vehicle can turn 360 degrees, enhancing drivers’ convenience to park the car, even in an odd space in a parking lot, the corner of a building, for example.

Professor In-Soo Suh said, “I expect that people living in cities will eventually shift their preferences from bulky, petro-engine cars to smaller and lighter electric cars. Armadillo-T can be one of the alternatives city drivers can opt for. Particularly, this car is ideal for urban travels, including car-sharing and transit transfer, to offer major transportation links in a city. In addition to the urban application, local near-distance travels such as tourist zones or large buildings can be another example of application.”

The concept car has loads of smart features on board, too: the cameras installed inside the car eliminate the need for side mirrors and increase the driver’s ability to see the car’s right and left side, thereby reducing blind spots. With a smartphone, the driver can control Armadillo-T and enable remote folding control. The car has a maximum speed of 60 km/h (37 mph), and with a ten-minute fast charge, it can run up to 100 km (62 miles).

Professor Suh explained that the concept of Armadillo-T was originally initiated in 2011 as he focused his research interest on the sub-A segment of personal mobility vehicles (PMVs), which are smaller and lighter than the current compact cars, as a new personalized transport mode.

“In coming years, we will see more mega-size cities established and face more serious environmental problems. Throughout the world, the aging population is rapidly growing as well. To cope with climate, energy, and limited petroleum resources, we really need to think outside the box, once again, to find more convenient and eco-friendly transportation, just as the Ford Model T did in the early 1920s. A further level of R&D, technical standards, and regulatory reviews are required to have these types of micro vehicles or PMVs on the market through test-bed evaluations, but we believe that Armadillo-T is an icon toward the future transport system with technology innovation.”

The research project has been supported by the Korean government, the Ministry of Land, Infrastructure and Transport and the Korea Agency for Infrastructure Technology Advancement, since December 2012.