City of Torrance to Test Accord Plug-in Hybrid 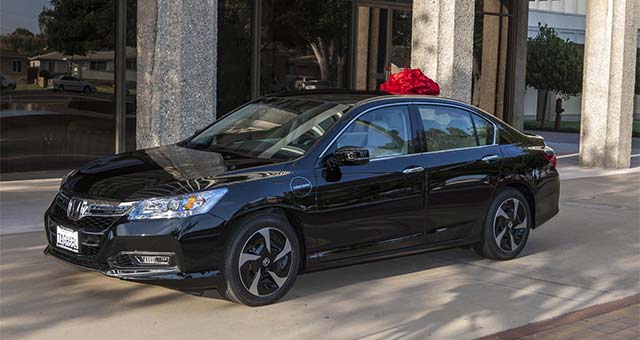 Honda delivered a 2014 Accord Plug-In Hybrid vehicle to the city of Torrance as a continuation of Honda’s advanced vehicle testing efforts.

The Accord Plug-In Hybrid, which is EPA-rated to operate in electric-only mode for 13 miles before transitioning between gasoline-electric hybrid and gasoline modes, will join the Fit EV in providing Torrance with in-city transportation options that reduce CO2 and tailpipe emissions.

Over the past year, Honda and the city of Torrance have worked together to collect real-world input from the city’s use of a Fit EV test vehicle. After driving more than 7,500 miles in combined city and highway driving, city employees, using the Fit EV for everyday business, were able to surpass the Fit EV’s adjusted Environmental Protection Agency mile-per-gallon-equivalency rating of 132/105/118 MPGe. By driving a Fit EV, Honda estimates the city of Torrance was able to reduce its CO2 emissions by roughly 74 percent when compared with a gasoline-powered vehicle, such as the Honda Fit.

The EPA-rated 115 MPGe Accord Plug-In Hybrid is the most fuel efficient sedan in the U.S. and is available at select New York and California Honda dealers. Based on the Touring trim level of the standard Accord Sedan but featuring unique styling cues, the 2014 Honda Accord Plug-In blends the athleticism and craftsmanship of the all-new Accord platform, combined with hybrid efficiency and electric torque.

In addition to being Honda’s first plug-in hybrid electric vehicle, the Accord Plug-In Hybrid is the first production car in the U.S. to meet the new, more stringent LEV3/SULEV20 emissions standard, and also qualifies for single-occupant carpool-lane access in California.

The Accord Plug-in can be fully charged from a low-charge indication point in less than three hours using the supplied 120-volt charger when plugged into a standard 120-volt household electrical outlet (use of a dedicated GFCI outlet is recommended), and in less than one hour using a 240-volt “Level-2” charger.