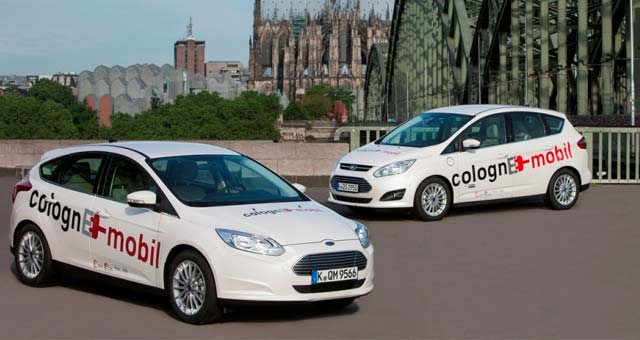 The C-MAX Energi vehicles form part of a fleet of 66 Ford electrified vehicles that will be integrated into the transport infrastructure of Cologne, Germany, to support the “colognE-mobil” research project that could offer a template for the potential further roll-out of electric vehicle infrastructures in other cities across Germany.

Project-managed by Ford, “colognE-mobil” also includes the recently launched Ford Focus Electric and is partly funded by the German government.

Ford launched the project in 2009 with three partners operating an initial smaller fleet of vehicles.

Now in its second phase, which runs from 2012 to 2015, Ford is working with 11 partners that include transport and energy companies, government departments, and research organisations. They are RheinEnergie AG, the city of Cologne, the University of Duisburg-Essen, the public transport providers KVB and RVK, the solar energy company Energiebau, Transportation Research & Consulting GmbH, the Cologne cab company Taxiruf, the Cologne/Bonn Airport, the TÜV Rheinland and DB Rent GmbH.

The second phase of the project will focus on:

The C-MAX Energi and Focus Electric are part of a line-up of Ford electrified vehicles coming to Europe in 2014 that will later also include the all-new Ford Mondeo Hybrid.