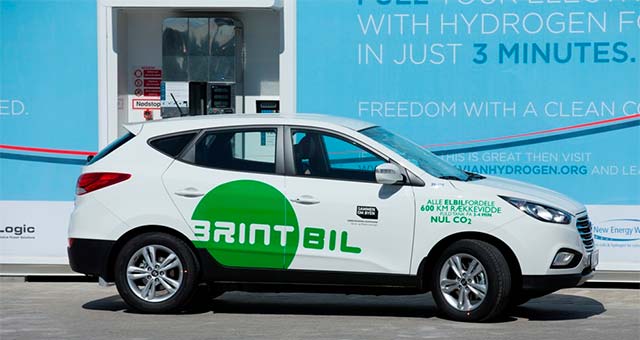 Hyundai Motor Company has delivered the first of its assembly line-produced ix35 Fuel Cell vehicles to the City of Copenhagen in Denmark.

The 15 ix35 Fuel Cell units are the first hydrogen-powered vehicles manufactured on a production line to be introduced in Europe.

The ix35 Fuel Cell produces no harmful tailpipe emissions – only water vapour – and so its use will help the city of Copenhagen achieve its aim of becoming carbon-neutral by 2025.

Since 2011, Hyundai Motor has deployed prototypes of its third-generation ix35 Fuel Cell in a wide range of initiatives to raise awareness of hydrogen’s benefits as an automotive fuel; to support the drive for establishing a pan-European refueling infrastructure; and to demonstrate the cars’ real-world practicality to public and private organisations.

For example, EU policy-makers have access to ix35 Fuel Cell vehicles – via the EU Fuel Cells and Hydrogen Joint Undertaking (FCH JU) in Brussels– showing the market-readiness of Hyundai Motor’s technology. And, earlier this year, senior representatives from 100 European businesses learned about and tested the ix35 Fuel Cell at a Hyundai Motor event in Berlin.

The ix35 Fuel Cell is equipped with a 100 kW (136 ps) electric motor, and can reach a maximum speed of 160 km/h. Two hydrogen storage tanks, located between the vehicle’s rear axle, with a total capacity of 5,64 kg, enable the vehicle to travel a total of 594 km on a single fuelling. Filling the storage hydrogen tanks to maximum capacity takes just a few minutes.