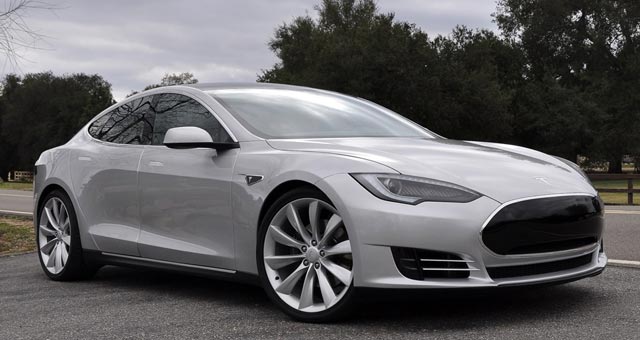 The Tesla Model S, an all-electric luxury sports car, has earned the highest score in Consumer Reports’ ratings: a 99 out of 100.

The $89,650 Model S, built by a Palo Alto-based Tesla Motors, performed better, or just as well overall, as any other vehicle—of any kind—ever tested by Consumer Reports.

“The Tesla Model S is packed with technological innovation,” said Jake Fisher, director of Automotive Testing for Consumer Reports. “It accelerates, handles and brakes like a sports car, it has the ride and quietness of a luxury car and is far more energy efficient than the best hybrid cars.”

The last vehicle to achieve a 99 in CR’s testing was the Lexus LS 460L, which CR tested in 2007. The Model S is the first time any electric vehicle to earn that score.

From a start, the Model S catapults from 0 to 60 mph in a mere 5.6 seconds. Engineers said its pinpoint handling is reminiscent of a Porsche, and the beautifully-crafted interior calls to mind an Audi. It’s also the quietest car that Consumer Reports has tested since the Lexus LS.

With a hefty 85-kWh lithium-ion battery, CR’s Tesla is easily the most practical electric car that has been tested to date. While the Ford Focus Electric and Nissan Leaf, for example, can go about 80 and 75 miles, respectively, before needing a charge, the Model S has been delivering closer to 200 miles—ample for commuting, running plenty of errands and still being able to take the long, winding road home. Range has varied from about 180 miles on cold winter days to about 225 in more moderate temperatures.

Over that distance, CR’s Model S returned the equivalent of 84 mpg. And with a full charge costing about $9 (at the national average of 11 cents per kWh), it’s like running a conventional car on gasoline that costs $1.20 per gallon.

The Model S isn’t perfect. Its lows include limited range, long charging times, and coupe-like styling that impairs rear visibility and impedes access. Another concern is investing in a new car and startup company with no track record for reliability or resale value, and a skimpy (although growing) service network.

Consumer Reports is the world’s largest independent product-testing organization. Using its more than 50 labs, auto test center, and survey research center, the nonprofit rates thousands of products and services annually. Founded in 1936, Consumer Reports has over 8 million subscribers to its magazine, website and other publications. Its advocacy division, Consumers Union, works for health reform, food and product safety, financial reform, and other consumer issues in Washington, D.C., the states, and in the marketplace.