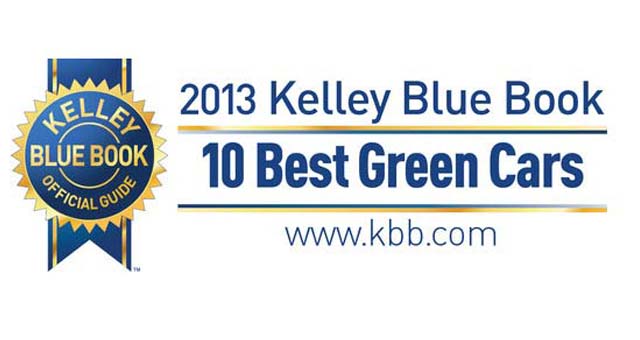 Green cars have gone mainstream. More and more of the best-selling cars in the country are being offered in hybrid, diesel or even pure electric form, giving buyers the ability to drive the car they want with the powertrain they prefer.

“A growing number of both eco-conscious drivers are going ‘Green’ when it comes to the new car they choose to drive, and auto manufacturers have primed the pump with the widest array of offerings in the ‘Green Car’ segment than ever before,” said Jack R. Nerad, executive editorial director and executive market analyst for Kelley Blue Book’s KBB.com. “After driving and testing nearly every new vehicle on the market today, our editors compiled a 10 Best Green Cars list that provides a roadmap for consumers looking to get more miles from each gallon of gasoline or to eliminate gasoline altogether.”

2. 2013 Tesla Model S
One could argue that the 2013 Tesla Model S is the electric car most likely to gain mainstream success. With blistering acceleration, distinct but tasteful styling, abundant interior space and an EPA-estimated 265-mile range, the Model S is among the coolest cars available, electric or otherwise.
City/highway/combined mpge: 88/90/89
Range: 265 miles

3. 2013 Ford Focus Electric
With Ford’s well-regarded 5-door hatchback as its foundation, the 2013 Focus Electric starts with a leg up. Toss in some cool features and an advanced powertrain that pairs a 107 kW electric motor with a liquid-cooled Lithium-ion battery and the result is a fun, practical runabout for green-leaners.
City/hwy/combo mpge: 110/99/105
Range: 76 miles

4. 2013 Chevrolet Volt
The Razzles candy of kilowatt cars, the Chevy Volt is an all-electric car for the first 38 miles after a full charge, then a gas engine kicks in to deliver the next 344 miles. The Volt is the clear choice for those who want more electric range than a typical plug-in hybrid, but more total range than an all-electric.
First 38 miles: 98 mpge combined
Next 344 miles: 37 mpg combined

5. 2013 Toyota Prius Plug-in
With a combined mpg rating of 50 mpg, it’s hard to believe that anything can top the Toyota Prius. Enter the Prius Plug-in, which adds 11 miles of all-electric driving and qualifies for solo-occupant carpool lane access in some states.
First 11 miles: 95 mpge combined
Next 529 miles: 50 mpg combined

6. 2013 Ford C-MAX Energi
Currently the most affordable plug-in hybrid on the road, the Ford C-Max Energi is vying for the hearts and minds of eco-conscious enthusiasts who suffer from severe range anxiety. Beyond its 21-mile all-electric range, the C-Max Energi can even be fun to drive, a rare trait among today’s green machines.
First 21 miles: 100 mpge combined
Next 599 miles: 43 mpg combined

7. 2013 Volkswagen Jetta Hybrid
The first gas-electric Jetta is 1) a fun-to-drive European sedan that 2) returns 45 combined mpg and 3) starts under $26,000. The Jetta Hybrid is a triple threat that lets you go green and have fun at once.
City/highway/combined mpg: 42/48/45

8. 2013 Honda Fit EV
Sharing most interior and exterior bits with its gas-powered counterpart, the Fit EV is actually the second battery electric car Honda has sold in the U.S. (remember the EV Plus?). Though only 1,100 copies will be produced, the lease-only Fit EV impresses as one of the most powerful and energy-efficient EVs available.
City/highway/combined mpg: 132/105/118
Range: 82 miles

9. 2013 Toyota Avalon Hybrid
The Toyota Avalon is all-new for 2013 and, thanks to the available gas-electric hybrid powertrain, one of the newest members of the 40 mpg club. If comfort per gallon were a thing, Avalon Hybrid might be king.
City/highway/combined mpg: 40/39/40

10. 2013 Lincoln MKZ Hybrid
While the badge might convey traditional luxury, the Lincoln MKZ Hybrid is a modern technological powerhouse on all fronts. From the hybrid powertrain to the MyLincoln Touch infotainment system to the sleek, coupe-like profile, Lincoln’s gas/electric mid-size sedan is as contemporary a vehicle we’ve seen from the automaker in a long time.
City/highway/combined mpg: 45/45/45