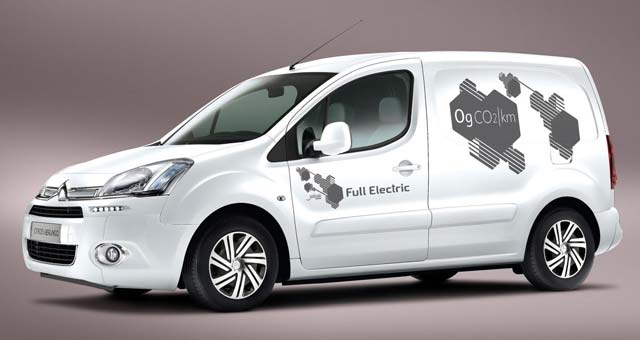 The all-new Citroen Berlingo Electric makes its UK debut on the Citroen stand at the CV Show.

The new Citroen Berlingo Electric, which goes on sale later this year, builds on Citroen’s market experience with electric LCVs, gained with the first generation Berlingo Electrique van, launched in 1998 and on sale until 2005.

Using a domestic socket, the vehicle can be fully charged in around 12 hours; alternatively, it can be charged to 80% of capacity in only 35 minutes using a specific 380V three-phase terminal in quick-charge mode.

Thanks to the Berlingo being designed to be an electric vehicle from the outset, its load compartment space is not reduced by battery intrusion. The Berlingo Electric’s electric motor is positioned under the bonnet and the lithium-ion battery pack is located underneath the load deck. This means the Berlingo Electric’s load compartment cube of 3.3m3 (extendable to 3.7m3)/load deck length of 1.8m (extendable to 3.0m) and payload of 636kg are equivalent to that of a similar diesel-powered Berlingo van.

The Berlingo Electric has a total lithium ion battery capacity of 22.5kWh – made up of 80 x 3.75V cells, each with a capacity of 75ah. Its permanent magnet synchronous electric motor, which produces 49kW (66hp), with a peak torque of 200Nm, developed between 0 – 1,500rpm, drives the front wheels through a speed reducer and a single-ratio gearbox.  In energy recovery phases (deceleration & braking) the electric motor acts as a generator.

When the battery charge falls to 20% of its total useable capacity, a warning light comes on and the power sent to the heating and air conditioning systems is gradually reduced. Then, when the battery charge level further falls to 10% of the total useable capacity, a “tortoise” light comes on – the power supply is limited and the air conditioning and heating systems are turned off to extend the vehicle’s range.

Pricing will start at £21,300 +VAT, full specification and pricing details of the Berlingo Electric will be announced nearer to its UK on-sale date.