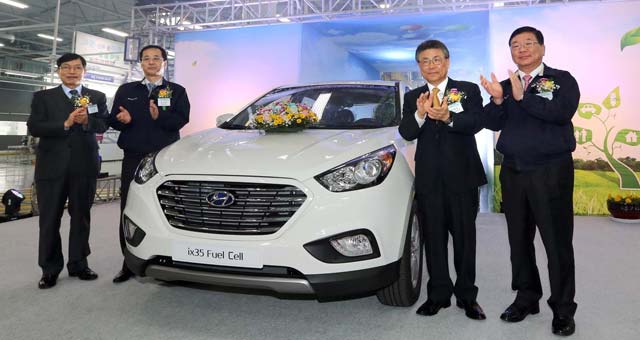 The ix35 Fuel Cell unveiled at the ceremony will be one of 17 destined for fleet customers in the City of Copenhagen, Denmark and Skåne, Sweden.

Hyundai plans to build 1,000 ix35 Fuel Cell vehicles by 2015 for lease to public and private fleets, primarily in Europe, where the European Union has established a hydrogen road map and initiated construction of hydrogen fueling stations. 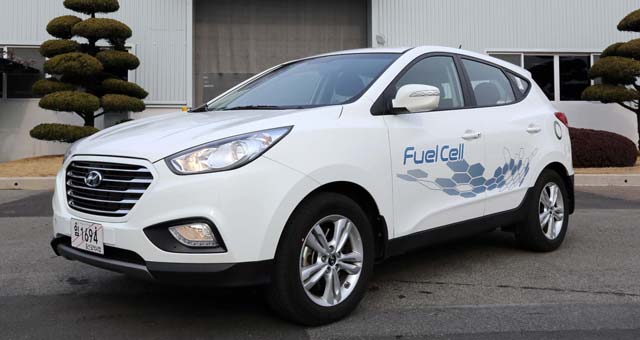 The development and application of a new radiator grille, bumper, fog lamps, instrument cluster and 7-inch GPS exclusively for the hydrogen fuel cell vehicles enhances the ix35 Fuel Cell’s marketability. Furthermore, modularisation of fuel cell systems for the core part of the hydrogen fuel cell vehicle — fuel cell stack, driving device and inverter — enabled the engine to be downsized to match the size of a petrol engine while improving productivity and making maintenance more convenient.

In January 2013, the ix35 Fuel Cell won the prestigious FuturAuto award at the Brussels Motor Show, celebrating its technical innovation.

The ix35 Fuel Cell is the halo vehicle in Hyundai’s Blue Drive sub-brand, the badge worn by Hyundai’s cleanest vehicles, including Sonata Hybrid, i20 Blue Drive and BlueOn, Hyundai’s battery-powered i10.

As governments around the world step up regulations to reduce carbon output and fossil fuel dependency, zero-emissions mobility solutions such as Hyundai’s ix35 Fuel Cell will become a driving force of change. The ix35 Fuel Cell aligns with the 2009 agreement by the European Union’s G8 countries to reduce carbon emissions by 80 percent by 2050 and California’s Zero Emission Vehicle regulations.

The ix35 Fuel Cell can be refueled with hydrogen in only a few minutes. It accelerates from zero to 100 km/h in 12.5 seconds, has a top speed of 160 km/h and can travel 594 kilometers with a single charge.

The ix35 Fuel Cell is the result of 14 years and several hundred million euros of research by hundreds of engineers at Hyundai’s fuel cell R&D center in Mabuk, Korea. The car has logged more than 2 million miles of road tests in real-world conditions in Europe, Korea and the U.S.

The first ix35 Fuel Cell vehicle rolled off the assembly line will be displayed at the 2013 Geneva Motor Show.