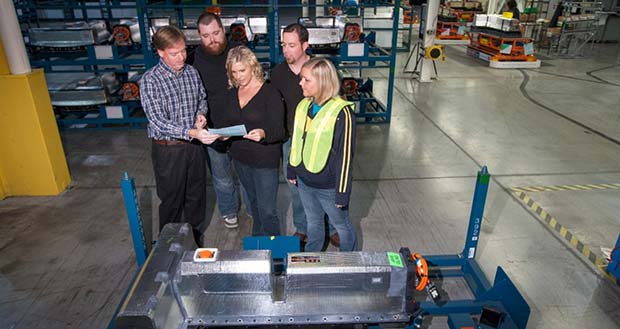 Valerie Myaard, Tony Lamentola, Brett Powell and Shannon Pearson weren’t born when their plant manager Jeff Lamarche entered his first General Motors facility in 1981. Three decades later, they are united in a Brownstown plant that is one of the industry’s newest and most high-tech facilities.

Forty-five percent of Brownstown’s hourly workers are 24-31 years old. They are part of the tech-savvy, environmentally conscious generation known as Millennials, and they’re focused on multi-tasking, taking on new challenges, career advancement and working together to successfully build the advanced technology batteries that power the Chevrolet Volt, Opel Ampera and the upcoming Cadillac ELR extended-range electric vehicles.

“They’re not just coming to work here expecting to do the same job for the next 30 years,” Lamarche said.   “They want variety and certainly do live up to the description of their generation in that they’re more portable. They want to do a lot of different things and adapt well to different jobs and different parts of the plant. They’re pretty motivated on how they can move up.”

Take 24-year-old Valerie Myaard, 28-year-old Shannon Pearson, and 26-year-old Tony Lamentola, for example. They all started at the plant as team members in 2010 and quickly ascended to become Team Leaders.

Myaard was a team member on the main line in a five-station department responsible for connecting three sub-sections of the battery pack into a single assembly. She is the youngest employee at Brownstown and was promoted to Team Leader in less than a year.

“My goal is to just keep moving up,” said Myaard. “I don’t do well settling. I like challenges.”

Pearson has also taken advantage of the career advancement opportunities available at Brownstown. She was a Team Leader on the module final line, where she managed a team that assembles and tests battery sub-sections. Pearson is currently advancing to a management position in the Material Department.

“I’ve never had a job where I’ve moved up so fast,” she said. “You don’t normally see that level of transition in such a short period of time, so for me it’s been really beneficial.”

Lamentola started out in the material department and was promoted to Team Leader recently.  He manages several people in the battery assembly and test operation, and is also responsible for leading the pack leak test and cover install teams.

“I like the idea of being able to tell my kids and grandkids when I get older that we were the people who started it and were the first people to get the battery-powered vehicles going.”

Jay Baron, president and CEO of the Center for Automotive Research, believes a younger work force is important for the auto industry to thrive. He sees plants like Brownstown as an ideal place to recruit young talent.

The lead technician tests and analyzes batteries to ensure quality. He believes working at the battery plant is a natural advancement of his early electric experience.

“Since there was so much excitement surrounding electric vehicles, I wanted to stay on that path,” said Powell, who has worked at the plant since July 2010. “It was a good career move.  The Volt is far more advanced than the little cars I was working on. What I liked best about going to work at Brownstown is that it was a new area of start-up so I had a chance to get in on the ground level, allowing me to learn and grow with everybody else.”

Millennials are forward-looking and extremely confident, but wary of the realities of the current economic climate and are drawn to opportunities that provide growth and development, according to Scratch, a unit of Viacom.  Almost nine in 10 Millennials are willing to put in the time to get ahead, yet just over one in two believe that people who spend a long time at one company are more likely to be successful than job hoppers.

“All of GM is committed to connecting with the Millennial generation, as employees and consumers,” said GM North America President Mark Reuss. “We must embrace a culture that gets behind this generation and positions them to lead us into the future. This plant is just one example of our young workers are making a meaningful contribution together with managers who mentor them and value their perspective.”[wzslider height=”400″ lightbox=”true”]