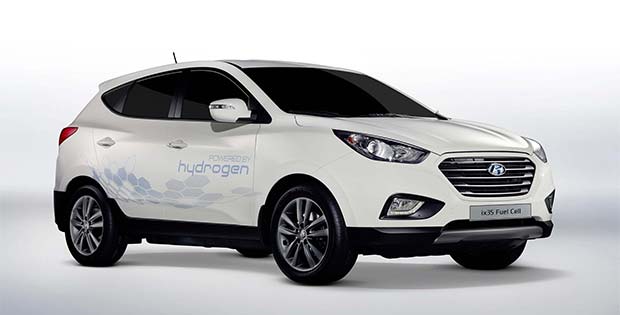 Hyundai Motor Co. announced that it will begin series production of its hydrogen ix35 Fuel Cell vehicle for public and private lease by the end of 2012.

In December 2012, Hyundai will begin production of the ix35 Fuel Cell at its Ulsan manufacturing facility in Korea, with a target of building up to 1,000 vehicles by 2015.

Hyundai has already signed contracts with cities in Denmark and Sweden to lease the ix35 Fuel Cell to municipal fleets.

Built with proprietary technology, Hyundai’s ix35 Fuel Cell is powered by hydrogen. A fuel cell stack converts the hydrogen into electricity, which in turn charges the Lithium Polymer battery that powers the vehicle’s electric motor. The only emission generated by the ix35 Fuel Cell is water vapour.

The ix35 Fuel Cell is the halo vehicle in Hyundai’s Blue Drive sub-brand, the badge worn by Hyundai’s cleanest vehicles, including Sonata Hybrid, i20 Blue Drive and BlueOn, Hyundai’s battery-powered i10.

Hyundai’s ix35 Fuel Cell boasts drivability and performance similar to that of the petrol ix35. The ix35 Fuel Cell can be filled with hydrogen in only a few minutes. It accelerates from zero to 62mph in 12.5 seconds, has a top speed of 160km/h (100mph) and can travel 588km (365miles) without refuelling.

The new Hyundai ix35 Fuel Cell has received an exterior makeover, with a new grille and other design touches that distinguish it from its predecessor test vehicles.

Inside, the ix35 Fuel Cell has received a significant upgrade. The fuel economy and range have been improved by 10 percent over the previous-generation model. Internal systems have been additionally modularised so the ix35 Fuel Cell can be easily manufactured on a conventional assembly line at Hyundai’s Ulsan facility.

Most importantly for motorists, the new ix35 Fuel Cell has been tuned for the demanding preferences of European drivers, with improved handling and driving dynamics.

Unlike other fuel cell vehicles that use compressed air to supply oxygen to the fuel cell stack, Hyundai’s ix35 Fuel Cell uses ambient air. This reduces parasitic loss in the oxygen supply, raising fuel efficiency and reducing power consumption by 50 per cent. For passengers, the elimination of an air compressor reduces noise inside the cabin.

In addition to the fuel cell stack, the ix35 Fuel Cell uses the same lithium-polymer battery found in the Hyundai Sonata Hybrid. A kinetic energy regeneration system charges the battery when the driver applies the brakes or drives downhill.

The ix35 Fuel Cell is equipped with stop/start technology, which shuts down the fuel cell stack and relies on battery power only when the vehicle is idling, minimizing energy loss in city driving.

Hyundai’s ix35 Fuel Cell is currently participating in the European Hydrogen Road Tour, organised by the European demonstration programme, H2moves. The Road Tour is a multi-city, pan-European display of hydrogen fuel cell vehicle technology, which has stopped in Paris during the motor show. Members of the media and the public are welcome to drive the Hyundai ix35 Fuel Cell at the Road Tour display.

Test versions of the ix35 Fuel Cell have already received both acclaim and significant day-to-day use. The ix35 Fuel Cell was selected as a test-drive vehicle for members of the European Parliament in 2011. Hyundai fuel cells and ix35 Fuel Cell vehicles provided power and transportation for the 2012 Yeosu Expo in Korea.

The ix35 Fuel Cell is the result of 14 years and significant financial investment in research and development by hundreds of engineers at Hyundai’s fuel cell R&D centre in Mabuk, Korea. The car has logged more than 2 million miles of road tests in real-world conditions in Europe, Korea and the U.S.

In early 2012, a Hyundai ix35 Fuel Cell set a range record for hydrogen cars by driving from Oslo to Monaco using only existing fuelling stations.