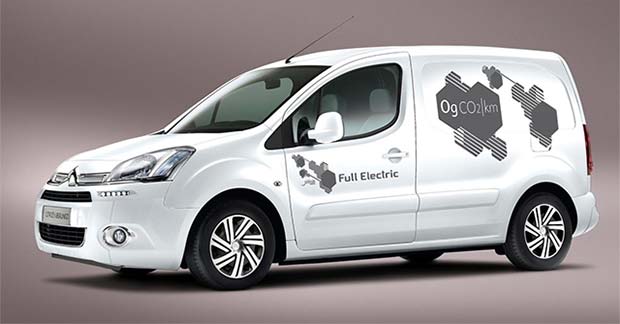 As with the Peugeot Electric, the Electric Berlingo is born from a partnership with Mitsubishi; the same partnership which saw the creation of the i-MiEV-based C-Zero electric car.

The new Electric Berlingo features the latest electric vehicle technology, while retaining all the award-winning qualities of the current Berlingo range, such as load volumes of up to 4.1m3and a payload capacity of 675kg.

The complete two-part battery pack is installed under the vehicle’s flat load deck, so that the load compartment is identical to the one found in the traditionally powered models. With a total battery capacity of 22.5kWh, the Electric Berlingo boasts a range of up to 106miles (170 km).

The Electric Berlingo can be charged in two ways. The normal charge mode lasts between 6 and 12 hours, depending on the available current, while the batteries can be charged to 80% of their capacity in just 30 minutes in quick-charge mode.

The Electric Berlingo’s motor was developed with Mitsubishi Motors Corporation and has a maximum power output of 49kW (67hp) and maximum torque of 200Nm. Its power is transmitted to the front wheels through a speed reducer and a single-ratio gearbox.

The Electric Berlingo’s many features include:

Depending on the market, the Electric Berlingo will be available with two bodywork options, normal and long, which respectively measure 4.38m and 4.63m. The load volume can reach 4.1m3and the maximum weight capacity is 675 kg, which are both identical to the internal combustion versions.

The Citroen Berlingo Electric will be available to buyers in the second quarter of 2013.

The full specification and pricing will be announced closer to the launch.[wzslider height=”400″ lightbox=”true”]