Survey Looks at Plug-in Electric Vehicle Use in California 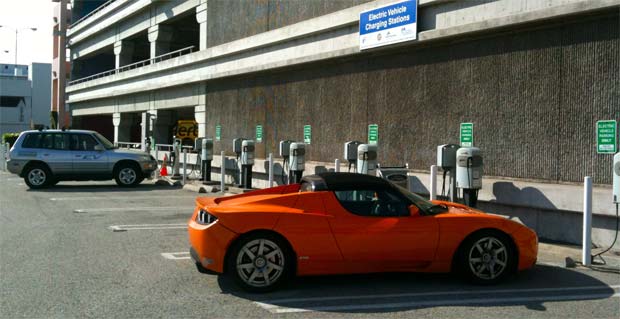 The more than 12,000 plug-in electric vehicles in California provide both consumer and environmental benefits, according to a new study by the California Center for Sustainable Energy ( CCSE).

The study shows owners drive their cars an average of 26 miles per day and charge their vehicles primarily at night, the type of data valuable to the auto industry, utilities and officials in further developing the market and infrastructure for electric vehicles.

California is the nation’s largest PEV market with roughly 35 percent of the U.S. total, and sales add about 1,000 additional cars in the state each month. Although the study did not directly calculate greenhouse gas emissions, PEVs produce considerably fewer emissions because California produces the bulk of its electricity with efficient and low-carbon natural gas. California PEV owners also have a high adoption rate of solar power, with 39 percent of respondents currently owning solar and 31 percent considering solar installations within a year.

“This is the largest plug-in electric vehicle owner survey ever taken in California,” said Mike Ferry, CCSE Transportation Program manager. “It’s still early in the development of a robust PEV marketplace, but California is firmly established as a national and worldwide leader in supporting advanced technology, zero-emission automotive transportation.”

Some of the highlights from the survey include:
•    85% of owners use their PEV as their primary car, driving an average of 802 electric-fueled miles per month.
•    In San Diego, favorable utility rates result in some PEV owners paying equivalent to $0.90 to $1.90 per gallon of gasoline to power their electric vehicles.
•    Because California does not use oil to generate electricity, the current electric vehicles in the state save approximately 350,000 gallons of petroleum every month, decreasing imports and reducing the overall demand for oil.
•    Roughly two-thirds of vehicle charging takes place in off-peak hours (between 8 p.m. and 8 a.m.).
•    39% of the state’s PEV owners have also invested in home solar energy systems, helping to power their vehicles with renewable energy and reducing greenhouse gas emissions.
•    In addition to charging at home, 71% of PEV owners report having access to either public or workplace charging or both.

CCSE also has prepared in-depth analyses based on survey results that address three specific topics: residential charging and the use of lower cost “time-of-use” electricity rates, the link between PEV ownership and residential solar, and vehicle owner access and willingness to pay for public vehicle charging.

CCSE and ARB, in partnership with other key stakeholders, plan to conduct additional surveys in support of the Clean Vehicle Rebate Project. The project provides rebates for the purchase or lease of electric, plug-in hybrid electric and fuel cell vehicles, ranging from $900 to $2,500. The ARB funds the project, and CCSE administers it throughout the state.

The 9 page report can be found here [pdf].