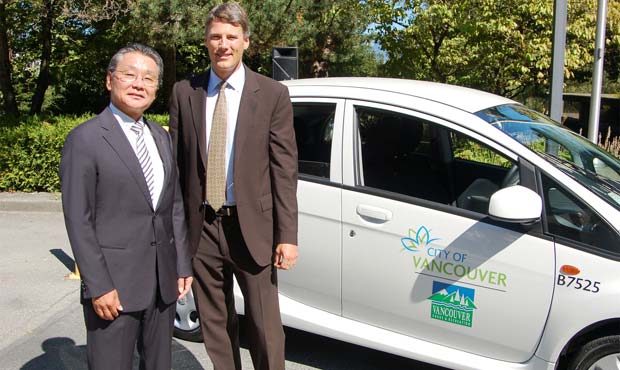 The City of Vancouver will add 13 Mitsubishi i-MiEV electric cars to its existing fleet of three, as a replacement to gasoline-powered vehicles that reach the end of their life cycle.

Mitsubishi’s i-MiEV certified dealerships have begun delivering cars to the City of Vancouver – all 13 units will arrive by the end of 2012, with the potential of an additional 17 orders in 2013. The City of Vancouver’s i-MiEV purchase is the largest of its kind since i-MiEVs launch in Canada in mid-December 2011.

Vancouver will pool its i-MiEVs among City staff to transport people, materials and equipment to meetings and worksites, fully utilizing its efficiencies, range and 1,430 L (50.5 ft3) of cargo capacity with the rear seats down. The City plans to install a number of Level Two 240-volt charging stations at City sites – capable of providing an i-MiEV with a full battery charge (from empty) in less than seven hours.

Without ever needing gasoline, or oil and filter changes, and significantly less maintenance requirements due to fewer moving parts, the City can anticipate significant cost savings with the i-MiEVs over time.

Since its launch, the zero tailpipe-emission Mitsubishi i-MiEV has made news for its advanced electric vehicle technology, progressive styling and fun-to-drive character. The i-MiEV is gaining momentum as one of Canada’s most popular electric cars.

Since its launch last mid-December and to July 31, 2012, MMSCAN dealers have delivered 149 i-MiEVs across Canada.